Could you underline the parts of sentence contained in: "她一向忌讳家人向陌生人提及自己的隐事"?

I am quiet weak at grammar, i know some basic chinese sentence patterns like

i am only sure about identifying

i am very unsure about the rest of the sentence, could you highlight what are the parts of speech contained in this sentence? 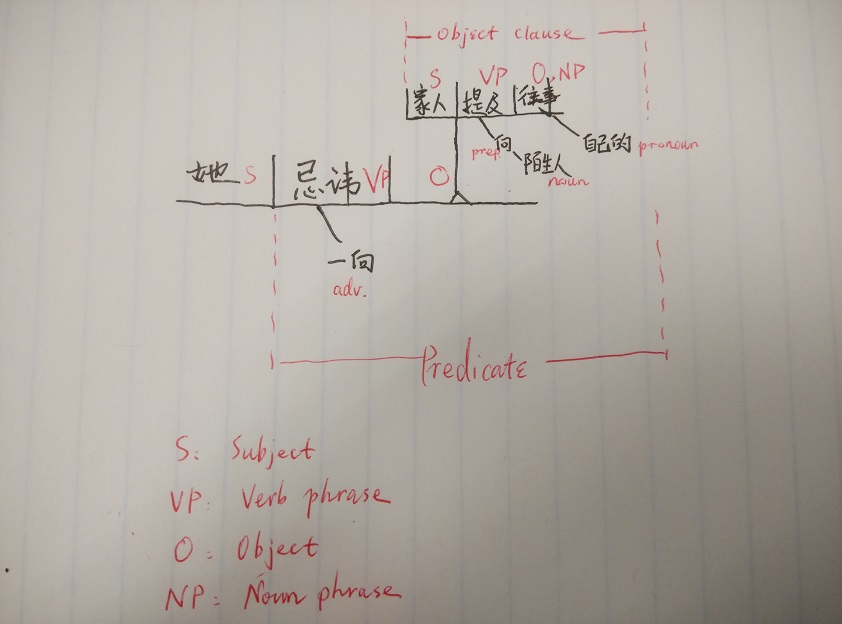 A predicate, by definition, is the whole verb phrase following the subject. You are calling verbs predicates which probably is incorrect.

Time phrase and place phrase are nothing special, they are just verb modifiers. IMO they don't belong to grammatical analysis.

It seems the sentence should be considered as sentence with S-P phrase as object, b/c the predicate verb indicates a mental activity, 忌讳 is similar 知道、希望，认为,.... Often confused with pivotal sentence, which is is similar in construction. It would also be considered a sentence with S-P phrase as object if the verb predicate refers to sense perception like hear,see.

S1tpP1(O1), where S1=她,tp=一向,P1=忌讳, (O1)=(S2ppP2O2),S2=家人,pp(prepositional phrase)=向陌生人,P2=提及,O2=自己的隐事,O2 is composed of attributive 自己的 and noun 隐事, seems very similar to English where the object of verb dislike can be a gerund phrase, BTW the whole sentence occurs in nciku as well as iciba with translation She always resents her family's talking about her secrets to strangers.

Not the answer you're looking for? Browse other questions tagged grammar syntax or ask your own question.

6
Use of 而 preceding verb
0
could you explain all the grammar which is included in the sentence: 君子務本，本立而道生?
0
Could you give an example of a sentence in classical chinese wherein 爽 is used?
1
Beyond 习惯 a general “framework” desired for 得's uses in “主语”“动词” 得是什么?, “主语” “动词” 得是鸟语，“主语” “动词” 得 “名词,” et cetera
1
What grammatical elements are contained in the sentence 你不听不就得了?
8
"I will," "I can," "I will (probably)" A fundamental problem with 會
1
Could you please correct my sentences?
0
Is my joke about my first talk at Nankai correct, understandable, and funny?
1
Using the word 为止 (with a time phrase)
2
Could somebody explain the meaning of the sentence to me?