What is a good technique for remembering tones?

I find it a great struggle to try and remember tones for all the new vocab I learn, and aside from gradually picking up tones by listening and talking with native speakers, I can't really remember tones. Does anyone have any suggestions for good techniques to do this?

There is a technique I started to use and actually, I've seen it also in other dictionaries, so maybe I wasn't that original...

But anyway, the answer is colors! When you're studying new Hanzi or vocabulary, just color each character according to the tone... It's very helpful to remember the tones, because after a while, you visualize the tones in your head through the colors. For example:

The tones obviously indicate the tones of the single characters1, it doesn't take into account the tone changes in spoken Mandarin2.

Obviously these tones are just mine, which means you can change the colors according to your taste. This technique is very useful for the computers, since you can use the colors. Concerning something handwritten, I can suggest using colored flashcards for each tone, for example, or using different pen colors.

For color blind people an alternative solution is needed. For single Hanzi on actual flashcards (not digital ones), a good idea would be the shape of the paper. Or the border style. For example an undulated border for the first tone and so on.

For expressions instead you could add a symbol below each Hanzi. I know that it sounds too complicated, but right now I don't have a better idea.

For people who tell me they "don't get" the tones, or who can say them but quickly forget them, I usually explain them as listed below. I imagine you're well past this point, but the visuals might help remembering them:

If this is useful at all, great. If you think it's crazy nonsense, just ignore it. Different strokes for different folks.

I've been developing and using the TOP (Tonally Orthographic Pinyin) system since 1995. There's a free online converter available at http://www.chinesepronto.com/triple/flashfix.php.

The TOP system is redundantly marked for tones: with colors, with capital and small letters, and with the standard Hanyu Pinyin tone marks.

The color system is simple and consistent: BLUE for first tone (high like the sky) Green for second tone (grows UP like a plant) black for third tone (low like dirt on the ground) Red for fourth tone (an angry sound in English, which is often associated with red) Neutral tone is gray and adds an asterisk (*) to the third tone form.

xia1ren2 chao3fan4 hao3chi1 ji2le5! XIĀréN chǎoFàn hǎoCHĪ jÍle*! (I can't figure out how this system would allow me to post colors, but the converter gives both colored text for use in word processors and in HTML pages. It works on my sites.)

The other useful thing to do with tones is to assign a directional gesture (another Mandarin-teaching extension I've been working on for some years now) to each new word. Yes, this is pain. But it really works. The gesture you choose (which can be arbitrary) must have both a meaning element and a tone element. As in ASL, which uses different areas of space to express past or future tense, with directional gestures we use areas of the body to indicate the tone of the syllable.

The combination of color-coding (we also color-code characters in our reading materials for students using the same color scheme, to reinforce when they are reading characters as well), tonal spelling and directional gestures works wonders with students' tones, both in knowledge of what is the correct tone and in their performance. Students are far more aware of tones when they are part of the syllable (you have to start writing a TOP syllable all over again if you get the wrong tone -- you can't just scratch in another tone mark as you can in Pinyin, and you know we are all guilty of that, at least I certainly was for many years!) and when the class cries out when you accidentally write a syllable using the wrong marker on the whiteboard, you know things are going in the right direction.

I feel this is a pedagogical shortcoming. New words should be introduced using pairs of words with the same sound but different tones, for example {天、甜｝,｛湯、糖｝,｛上海、傷害｝. This might help the learner make remembering tones a prioity in his efforts to learn the language.

For example, in a lesson with 20 new vocabulary words, perhaps there should be two pairs of words with the same sound but different tones.

In my early struggles with Chinese it seemed that there was no placeholder in my brain for the tone associated with a word. I think exercises like finding words with similar sounds but different tones helped to "create" that slot in my brain to hold the tone.

If none of these work for you, there's a Romanization system that takes tone into account. It's called 国语罗马字. I know ditching Pinyin can be tough, but some people find this very useful to learn the tones.

Depends on your method of memorizing characters. If you are using a story, it would be easy to append the tone somewhere in there. Even if you are not, I would recommend using this method, works well!

Update: So far, I was largely ignoring tones when memorizing new words. Not a good idea, but it did help in giving me a good momentum. Now, I have switched to using bopomofo (http://en.wikipedia.org/wiki/Bopomofo) and not pinyin which I was using earlier, this thing really helps as when you are typing characteres you actually have to key in the tones to get to the final set. I like how it reinforces the association.

I use my fingers whenever I say the character.

I also use color-coding, just as the others have shared.

I am keen to share my tips with you - colour coding to master tones. 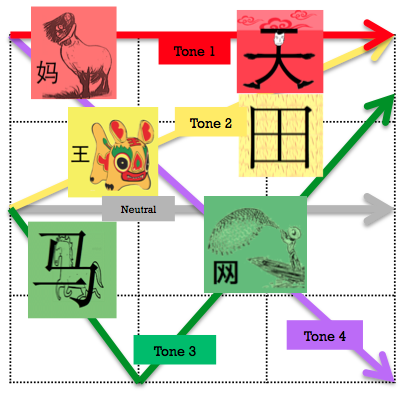 I don't speak Mandarin and never will, but I was faced with the same problem as you in Cantonese -- and we have a couple tones more, and no real rules for tone sandhi.

So my first step was to stick to jyutping and learn the reading(s) of sinograms as a "full set": sound+tone number. So I wouldn't just learn "gwok" for 國 but "gwok3" (gwok three, and later gwok saam, in my head).

The second step was "musical" -- in the sense that I was memorizing the tone contours of a word, an aural memory of my voice going up/down while pronouncing (hopefully correctly) the word. I am gifted with a very acute sense of hearing and musical memory, so this may or may not work for you.

Not the answer you're looking for? Browse other questions tagged mandarin tones vocabulary or ask your own question.

0
How can I memorise easily the four tones?
6
Which is the most frequently used tone?
1
Do native speakers learn about 4 tones in school or do they naturally pick them up without formal education?
3
What effective methods exist for visual learners to get Chinese grammar?
2
Tones and Pinyin, Foreigners vs Natives

17
Tips for pronouncing X vs SH in Mandarin?
5
Selecting resources to improve reading for upper-intermediate level?
10
Adding tone marks to characters
4
Learning abstract “tone contours” for words and phrases
3
How can I improve my tonal range?
2
Tones and Pinyin, Foreigners vs Natives
2
Help with tones?