Why 干菜类 was mistakenly translated to Fuck Vegetables?

In the following famous sign which appeared in some supermarket in China: 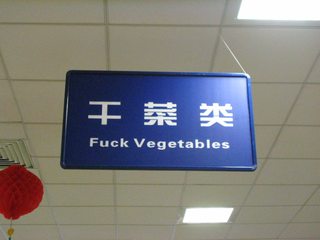 why 干菜类 was mistakenly translated to Fuck Vegetables instead of Dried Vegetables? Is there any hidden meaning in it?

In traditional Chinese, 乾 means "dry", 幹 means "to do", and has the slang meaning of "f**k". Both words are simplified to 干.

GAN: Whodunnit, and how, and why?

[Victor Mair sent in further analysis of a common but spectacular mistranslation, discussed in earlier LL posts: "A less grand Chinglish" 5/30/2006, which dealt with a button labelled "dry fry" in Chinese and "fuck to fry" in English; and "Engrish explained", which discussed a menu item reading "Hot and spicy garlic greens stir-fried with shredded dried tofu" in Chinese, but "Benumbed hot vegetables fries fuck silk" in English, 3/11/2006. Victor's note follows. ]

The translation of GAN as "fuck" is fairly ubiquitous in China. There are complications, of course, since GAN1CHAO3 on the sign I wrote about must mean "dry fry," with GAN1 in the first tone, whereas GAN meaning "fuck" probably derives from GAN4 ("to do") in the 4th tone. This latter word, furthermore, is written with an entirely different character in the traditional script (幹), though GAN1 and GAN4 have both collapsed into the same three-stroke calendrical graph in the simplified script (干). Furthermore, the actual sign from which I took this example has an arrow next to the GAN1CHAO3 / FUCK TO FRY which seems to be pointing to a button that you're supposed to PUSH to start the frying. Still, if naughty people are intentionally producing these risque, nonsense translations, then the double entendre of GAN1/4 ("dry / fuck") must be taken into serious consideration.

These sites show how widespread the mistranslation of GAN1/4 as "fuck" is:

http://pangea.stanford.edu/~pvermees/chinglish/index.html (select "Fuck the price" in the radio box).

Just google {Chinglish fuck} and you'll get a lot of results.

I am trying to make sense of how this phenomenon actually came about. It seems that the twenty or so different meanings of the three-stroke calendrical graph that is used to write GAN1/4 (a total of three distinct graphic forms in the traditional script -- 乾, 幹, 干 -- all reduced to one -- 干 -- in the simplified script) in Chinglish have all collapsed into the single meaning of "fuck". Wherever that graph occurs, Chinglish speakers will translate it as "fuck".

This is an extremely bizarre situation, because:

a. normal Chinese-English dictionaries do not even give this definition

b. the widespread rendition of GAN1/4 as "fuck" in all sorts of situations where other translations are called for occurs on restaurant menus, official notices, and so forth, and it is not likely that the proprietors would intentionally want to insult or embarrass their patrons

Who's telling the menu-makers and sign-painters to write "fuck" for GAN1/4? They probably don't even know English and probably don't know much Chinglish either. How did this get started? (Perhaps somebody was being intentionally mischievous.) And how did it become such a common phenomenon? That's the real mystery. How is this horrible mistranslation continuing to spread and not being caught by the tens of millions of Chinese who do speak good English?

I'm deeply interested in the linguistic mechanics and the sociolinguistics of this baffling phenomenon. It is almost beyond belief that GAN1/4 as "fuck" proliferates when there are so many other good translations available in different contexts. You'd think that at least they'd write "do" everywhere, or that people who do know English would tell the proprietors to hurry up and change the offending word so as to avoid further embarrassment!

I've been living in Beijing and working as a free-lance translator for some time now. It's pretty common for clients to take a text, hand it off to a (cheaper) Chinese translation company, and then pass it on to me to 'edit' - a lower-paid gig - and so I've seen quite a lot of this kind of thing. My guess, with the disclaimer that Prof. Mair has forgotten more than I'll ever know about Chinese, is that someone ran the Chinese 干炒 in the example in your blogpost, and the menu posted on rahoi.com, through a machine translation program, perhaps Jinshan Kuai Yi or something of the sort, with the offending results.

Can someone verify that there is a common Chinese-English MT program that maps GAN to "fuck"? That would explain a lot, if it's true. The puzzle then would become why outraged customers have not forced a modification of the software... ]

These bad translations are actually quite rare nowadays as google translation gets "clever". However, "好事不出门，坏事传千里", rare things do get popular.

I don't think there is a hidden meaning behind this. The reason would be more of a question. It could be a bad joke or just someone who knows nothing about English and looked it up in a dictionary.

These translations can always give you a good laugh. 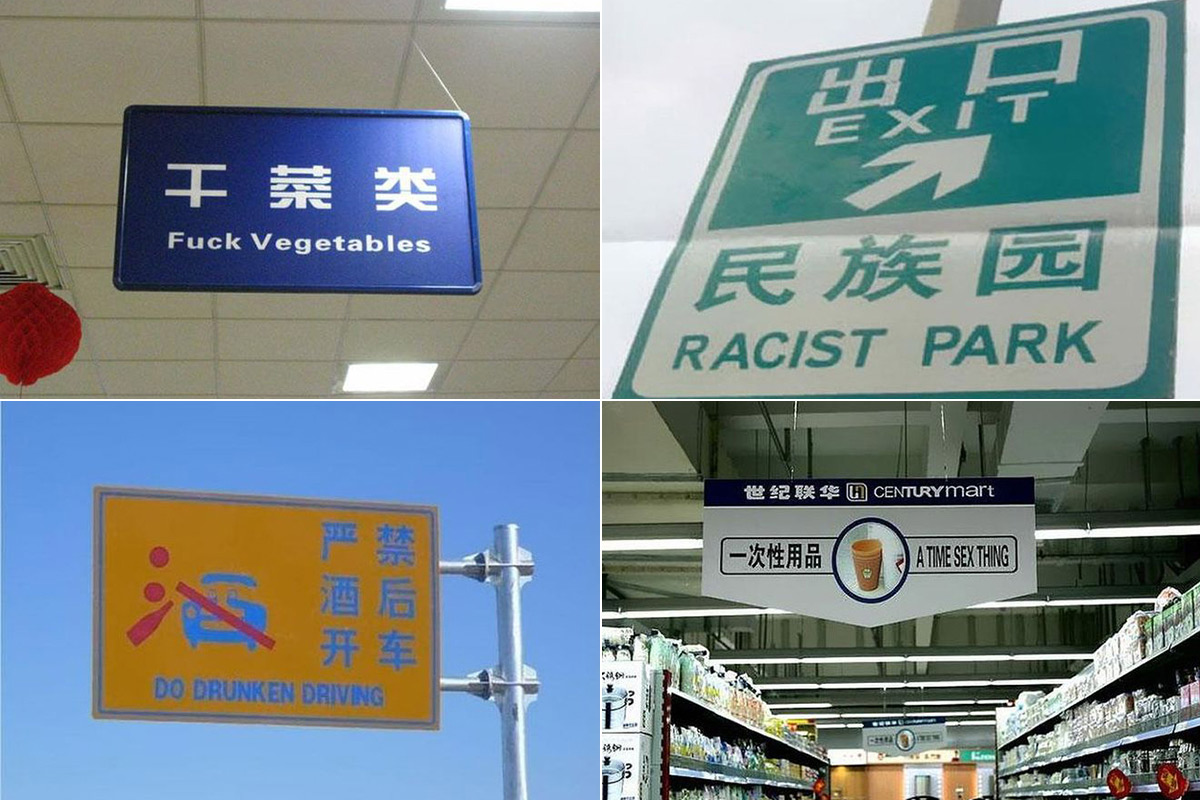 Maybe the following image can answer your question. 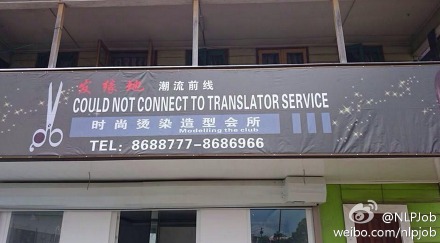 This translation is just a mistake of English understanding. 干 in China has many meanings.

It could mean either:

7
Why 意大利 and not e.g., 意国
2
English translation for 来 in 你哪儿来的这么多书? compatible with a Chinese-to-English dictionary
3
Help translating 海南鸡饭 - 3
2
Is there a "better" translation for "你我还没完呢"? Why is it "你我" without a possible "和"? And please can anyone confirm the function of "呢" in this one?
8
To 了 or not to 了
1
Could a translation error lead to squares to not be considered as rectangles? (Mandarin)
6
A better translation of 假作真时真亦假，无为有处有还无。
7
Why in Chinese Bible (和合本), "you" was translated as "你" instead of "您"?
0
What is the original of "Sold Out" by poet Mo Mo?