What does 'duang' mean in 'online Chinese'?

I see this word popping up on Weibo and Taobao. It's not written with any character, but spelled out in Pinyin. What does it mean?

Citation, with explanation of the word in bold:

Think that your hair is looking particularly good today? In Chinese popular culture, it's looking "duang."

A Chinese phrase that came out of nowhere, "duang" has taken the Internet by storm, even though many don't really know its origins.

We do know where "duang" started though. It was Hong Kong action star Jackie Chan, who in 2004 was featured in a shampoo infomercial, where he spread his hands and described how his sleek dark locks would simply "duang" after a scrub with Bawang organic shampoo. A useful way of translating the word is as "boing," in the sense of "bouncy and vibrant," or even "ta-da!"

A parody video making fun of the old commercial recently hit the web, making the word a social media trend. It's been widely interpreted as "cool," and the word resurfaced again recently after Chan posted it on his Weibo page. It has become to Chinese slang what Kim Kardashian's rear end is to U.S. popular culture. It's breaking the Internet as Chinese pop stars are called "duang pretty" and the like.

Although it's a long way from featuring in a dictionary, it's been used millions of times on the Chinese social network Weibo and has been looked up 1.5 million times on China's biggest search engine, Baidu.

In case you're "duang confused," you just need to know that "everyone's "duang-ing" and it's great" or "This is so duang hot" are the kinds of comments you see on the Weibo social network these days.

There have also been numerous mash-up videos, and apparently during the visit of Britain's Prince William to China last week, he was greeted by some people saying "duang, duang," because the English gentry look is seen as cool in China.

It means cool, damn or whatever you want it to mean. Informally, the character is 成 over 龙, that is after the innovator.

Following what 倪阔乐 mentioned, here is a helpful visualization for how the newly formed pseudo-character looks like: 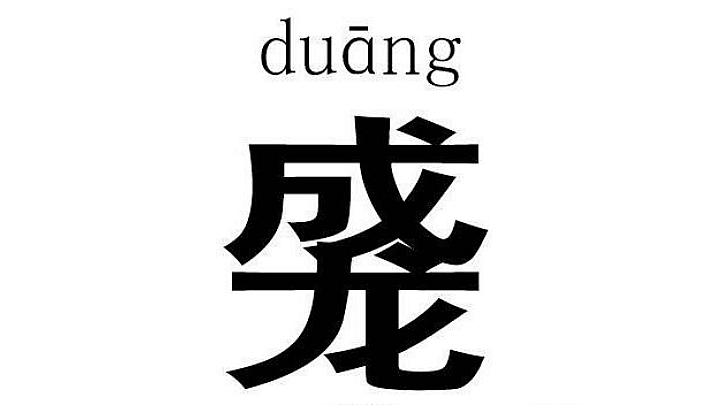 Not the answer you're looking for? Browse other questions tagged word slang internet-slang or ask your own question.

5
Are authors of Chinese fantasy novels able to create names for fictional creatures/races?