What is the Socio-linguistic Function of Mixing Pinyin and Characters Together By Adult Native Chinese Writers?

Several linguistics-oriented scholars, most notably Dr Mair, have recently noted the growing trend in written Chinese discourse towards "digraphia" - the dual use of Pinyin and Chinese characters as sort of a protomorphic kanji+katakana-esque ensemble.

The obvious, and de-facto standard, explanation for this growing phenomenon is the difficulty of writing/remembering characters such as 喷嚏 relative to the simplicity of writing "pen ti". However I am curious concerning phenomena such as the following (from the package of a present sent to someone around CNY): 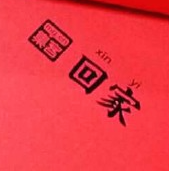 Where "xin1 yi4" is the pinyin for 心意 - incredibly basic characters for which the "too difficult" explanation simply doesn't apply.

So what is going on here? How is the Pinyin+Character combination perceived by native Chinese speakers? Is the inclusion of pinyin a stab at some sort of additional sophistication somehow conveyed by the inclusion of roman letters? Is it an aesthetic effect (e.g.: it makes for an "interesting mix")?

How should 老外 interpret the "effect" of such combinations of Pinyin and characters?

The 训读 (this jargon comes from Japanese) phenomenon is rare in Chinese, but it does exist, e.g. 廿 may be pronounced as èr shí (二十), 圕 as tú shū guǎn (图书馆), 哩 as yīng lǐ (英里). Doesn't that happen in English? Many people pronounce "etc." as "and so on", "i.e." as "that is", "e.g." as "for example". Traditionally, the function of 训读 in Chinese is to make difficult characters easier to pronounce and understand, but pinyin is rarely used in this case.

Recently pinyin used for non-standard 训读 in Chinese becomes popular, especially on the Internet, possibly inspired by the Japanese ACG (animation, comic, game) culture. It often suggests the deep, hidden meaning behind the apparent Chinese characters. The example in your post, 回家(xīn yì), suggests "coming home is a present (心意) for your parents". You can also find some funny examples like "丧(gan)心(de)病(piao)狂(liang)" -- it ostensibly reads "frenzied, crazy" but in fact the writer shouts out "干得漂亮, good job!" in his mind -- the effect is comical.

Besides, the reason why pinyin is chosen for denoting the implication may be obvious:

Not the answer you're looking for? Browse other questions tagged pinyin or ask your own question.