How To *Write* The Northeastern ‘ber lou’?

A long time ago a Northeastern friend of mine showed me how to write ‘ber lou’ using 汉字.

‘ber lou’ being the northeastern equivalent of 额头.

I have since forgotten how ‘ber lou’ was indeed written. 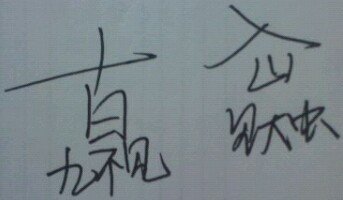 Dialect characters (方言字) exhibit great variation in the way they are written. The same character can have different meanings and even wildly different pronunciations between different varieties of Chinese, as they are not constricted by the regular developments from Middle Chinese. Even characters taken for granted in Standard Mandarin exhibit variation (e.g. 走、嘛).

Hence characters for dialect characters are often established and legitimised by lexicographers in dialect dictionaries, whereas those in common use are often subject to lack of standardisation and even of recognition.

So I looked up Yin Shichao (尹世超)'s 《哈尔滨方言词典》 Harbin Dialect Dictionary, published in late 1997. On page 317 there is the following entry:

Of course, other characters are used: the one represented by the breakdown "十日九不见，入山见大虫" seems to interpreted to several different lexemes: the one above for forehead, and another referring to wolves, and another for stupidity. All of the expressions, to my southern ear, sound particularly northern and dialectal.

5
Where can I find Codecademy for Written Chinese?
3
My Chinese Character Writing is Sloppy
11
How gender specific in writing is the character 他
7
Bottom component of 青 and 䏍
3
How to write your original (non-Chinese) and Chinese name, jointly
0
How to write Chinese fluently?
4
Why native speakers always say "一块钱" and write "一元钱 "instead of "壹圆钱"？
1
How many English words does 4000-8000 Chinese characters correspond to?
1
Is the text 若承租人是公司，则必须提供法定代表人资料 official and correct?
2
How to pronounce English words in Chinese