Where did the word "panda" come from?

If pandas are from China and in Chinese they are called 熊猫 ("bear cat"), where did the word "panda," as seen in most western languages, come from?

I think this article answers your question..

Why is the panda called so?

The origin of the name panda is the Nepalese word 'nigalya ponya', which means 'eater of bamboo'. As used in the West, it was originally applied to the red panda, to which the giant panda was thought to be related.

FYI, below is the red panda. I didn't know until now. 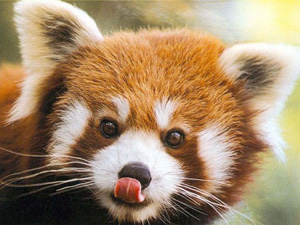 For people interested in the origin of 熊貓, check this blog entry.

While in modern English "panda" generally refers to the giant panda, the word originally1 referred only to the red panda. Since the giant panda eclipsed the red panda in popular culture, "panda" became more associated with the larger animal and the smaller took the retronym "lesser/common panda" or "red panda".2

A similar evolution of terms happened in the modern Chinese words for panda, where 熊貓 originally referred only to the red panda, but (when prefixed with 小/大) became a term for both the red and giant panda (since the original Chinese words for giant panda had apparently fallen out of use):

Other older names for the giant panda include:

A different confusion happened with one of the (theorised) old Chinese words for the giant panda, 貘 (mo). This word (like many wild animal names in antiquity) was also used for certain mythical creatures.3 The term's presumed meaning of "giant panda" fell out of common use until a western biologist encountered its historic use describing the mythical mo, and noting its [coincidental] similarity to a tapir, assumed it was a word for a Chinese tapir. This zoological usage then spread back to China:

Other antiquated terms possibly describing the giant panda include (referring to legendary black and white tiger/leopard/cat/bears):

10
Why is "steak" 肉排?
14
Do 之 and 的 come from the same word?
7
Character 瞓: where did the pronunciations come from?
9
Glyph origin of 也
1
What is the origin of the word "香蕉?"
6
How did "kitsch" (刻奇) come to stand for emotional contagion in a group?
2
How did the word "ketchup" come into the English language?
1
How did the hedgehog come to mean gather?
1
校 - How did "leg-brace" come to mean "school"?
4
Did the Chinese 獅子 = "lion" originate from the Persian شیر (šīr)?