Does anyone know the meaning of this character (𣟂)?

The only things I found about it is its vietnamese reading "khuôn" and that it is used in 𣟂𩈘 (meaning "face").

The Nom Foundation has a lookup tool that might give a clue: 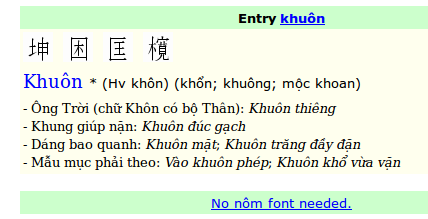 Although I don't understand which entry belongs to which character, or what the relationship among the characters is (Han Nom was less standardized than Chinese Hanzi, so some of the 4 shown here might even be distinct variants), my best guess based on the expressions is 'mold/mould' as in molding/moulding (or the derived meanings like 'shape/pattern'). The 木 radical might also support the meaning, since molds tended be made from wood in earlier times (additionally, the Mandarin Chinese equivalent for mold/mould is also based on the 木 radical: 模 [mó/mú]).

EDIT: If the two-character expression used in your description is transliterated as 'khuôn mặt' (literally "face shape"), I guess the character in the title means 'shape'.

This is Vietnamese-only CJKV Characters, it is created by Vietnam. Meaning is : shape, pattern, mold.

3
Does anyone know what is the characters means (丁財貴寿)?
23
Why do native speakers often say a character has "no meaning"?
8
Why does the radical for water and ice often look so weird
3
Is there any record on this specific variant of the character 選?
0
Origins and usage of '襨'
2
Radicals vs glyph origins (specifically for character 肚 in 肚子)
1
Is 賖 just a variant of 賒？
1
Does 伊 have any special meaning?