Deciphering a seal on the bottom of a Buddha figure (Characters identified: 乾隆御製)

I have a friend who bought a Buddha figure on a Chinese market. On its bottom there is this seal, written in seal script, that has an original size of 1.5cm × 1.5cm. Any idea what it means?

The character at the top left seems to have the component 是, the character on the bottom right is probably 隆. I've no idea on the others though. 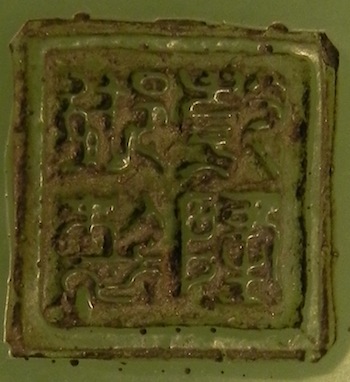 Frankly speaking, I have very few knowledge about works of art, but for the characters, they look like "乾隆御制(traditional Chinese:乾隆御製)". These characters are written in 小篆, which is an old font originally popular in 秦 dynasty and then mainly popular in seals afterwards.

"乾隆御制" means "[this work is] made for the emperor of 乾隆, or the royal members".

By the way, I believe this work is fake, since the font of "乾隆御制" is generally “楷体", not "小篆". I have seen some works made in that times on the TV (there are many TV programms for identifying such works nowadays)and I don't remember a work with that font.

I think it's 乾隆御笔. It means This is written by the king 乾隆

Have a look at this stamp, it looks similar to your seal...

Here is a collection of all 乾隆's seal if you are interested.

9
How do I self-answer "What does this say?"