Does Cantonese have a falling tone?

In all Cantonese romanization systems I could find, tone 4 is labelled the falling tone. However according to http://www.freehongkong.net/cantonese-pronunciation-cantonese-tones/ Cantonese does not have a falling tone. The author of that page has renumbered the tones so his tone 6 corresponds to tone 4. He describes this tone as "bottom flat".

When listening to people pronounce words in tone 4, I can clearly hear it as falling. Is there any truth to the author's claim?

Standard Cantonese's 陽平 tone is definitely pronounced with a falling contour (21). Modern Cantonese Phonology by Robert S. Bauer, p. 144 appears to acknowledge, but did not find, a low-level contour for this tone though:

"Perceptual learning of Cantonese lexical tones by tone and non-tone language speakers" by Francis et al. (2008) also measured the contours of the fundamental frequencies of each tone, and a definite falling contour was seen. This figure from Wikipedia reproduces the contours found in that paper (refer to the line for tone 4, 時): 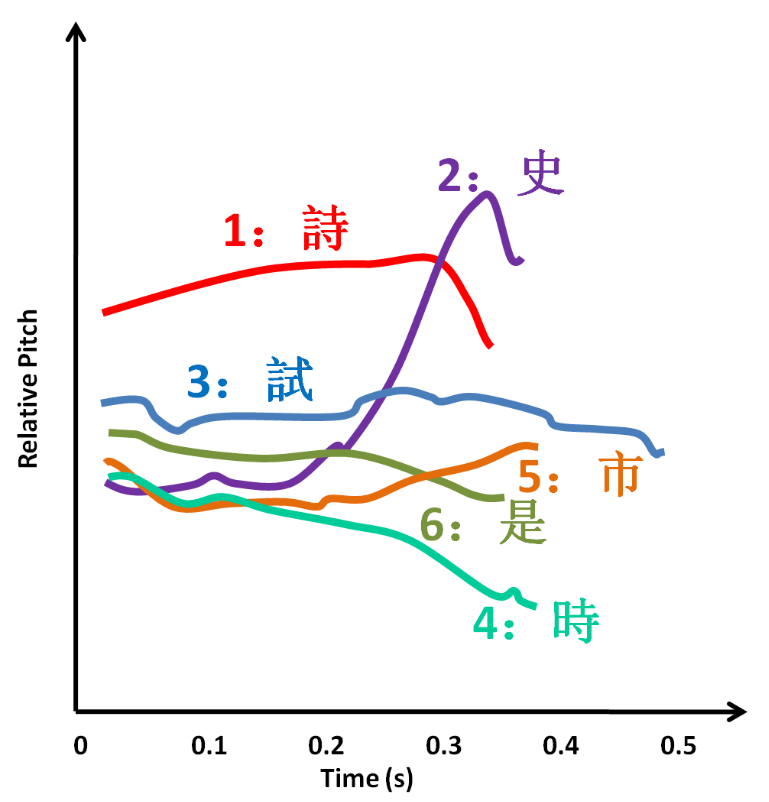 I would try to avoid using the romanization scheme advocated in your link. It appears to reorganize the tones to make them appear more systematic than how they are actually pronounced. While that may help with learning the tones, it may introduce more confusion later, especially since it goes against the numbering scheme that all of the other Cantonese romanization schemes use.

Adding to @Claw's answer, Standard Cantonese used to have (and I heard in some dialects still has) TWO falling tones (and thus a total of 7 tones). This is still acknowledged in modern-ish dictionaries like the one published by CIHK. The former tone #2 was a high-mid falling tone, akeen to Hakka's fourth tone.

Not the answer you're looking for? Browse other questions tagged pronunciation cantonese tones or ask your own question.

5
Tone of 竟 and 境 in Mandarin and Cantonese
3
Cantonese jyutping Tone 4 question “throat should be vibrating”
5
Are tones sometimes glossed over?
6
Strategies to discourage uptalk in Chinese language learners?
3
“an” final pronunciation
3
How can I improve my tonal range?
3
Why does 空 have a fourth tone reading in 空格, but a first tone reading in 空调, 空气 etc
2
Does Taiwanese Mandarin have the neutral tone?
5
Does pronunciation of a vowel change with tones?
0
How to pronounce 學 “shwehh”, “shoo-ehh”, or “xüüehh”?