anyone know common usage of Tradtional Chinese fonts for website?

I have come up with this list after a bit of Googling, but not sure.

I have checked a few random news sites from HK and Taiwan, here are some examples of defining the font or font-family property:

A couple of notes:

If a font cannot be found, your browser will just move on to the next one in the stack, it's not gonna break.

Example: Viewing what fonts are used for a certain piece of text in Firefox (Rules tab):

... and what fonts actually display (in my case I don't have any of those fonts installed; Fonts tab): 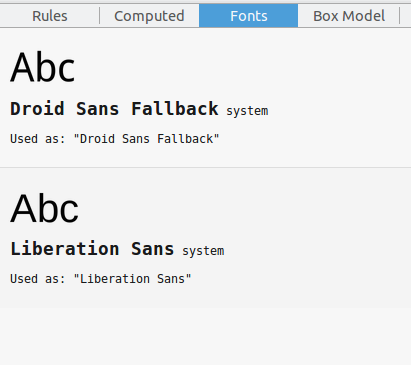 You can also check a number of websites about what Chinese fonts are installed by default on certain operating system, e.g. OSX, Windows and Android.

I don't think it is a proper question for this site, but I do web developing as well.

As you know, Chinese fonts are not easy to make because we have thousands of characters, so we only have a few fonts. The most used fonts are PMingLiU(serif), Microsoft JhengHei(san-serif) and image font for headings like in Apple's website.

How I would implement

We do not use web font because who would want to download a 30MB file? Different PC uses different names for fonts so it's best to do

It is to ensure they load the font. Also, you can treat MingLiU as a fallback for PMingLiU.

How Microsoft does it

The above is copied from Outlook.com in Traditional Chinese.

Also, Windows XP or older do not have the sans serif 微軟正黑體, only PMingLiU. Windows default Chinese font in browser is PMingLiU, serif. While Mac uses sans serif font by default, HeiTi TC and HeiTi SC. In short:

All the above have PMingLiU or similar serif Chinese font installed.

Not the answer you're looking for? Browse other questions tagged fonts websites or ask your own question.