My wife gave up trying to correct me on how to pronounce green.

I find it very hard to get a distinct sound from the word for 绿 (lü4 - green), Lu, and, Liu (as in Liu Bei). Obviously, Lu is exactly how it reads in English, but the other two are hard to get right with the tongue.

How can I pronounce this sound?

The sound represented by the ü sound in Chinese is the same as the German ü; this sound is a close front rounded vowel, the IPA is [y]; you can hear a sample in the link.

As you see in the table below in that wikipedia article, which lists the languages that possess this sound, we see both Mandarin (which uses green as the example) and German. So the sound is the same.

The best way to teach this is:

Basically, you have the same lips position for U and Ü, but a different tongue position, the one for the [i] sound.

Look at the image below. The tongue position is different in [i] (upper-left) and [u] (upper-right). 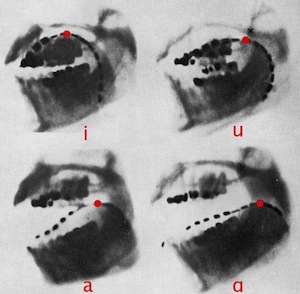 There seem to be 2 ways to describe the ü sound. One is the one Alenanno describes, and for example also mentioned on ChinesePod

To make the basic ü sound, make a continuous "ee" sound. As you make the sound, round your lips into the position they would need to be in to make an "oo" sound. By making the "ee" sound in your mouth with your lips in the "oo" position, you are pronouncing Mandarin's ü sound.

The other one is described in this book.

Place your tongue tip so that it touches the back of the lower front teeth. At the same time, stretch the corners of the mount towards two sides. Then draw your lips in to form a perfect circle as small as possible.

I don't agree with Alenanno about the position of the tongue. For example this book says that ü should be at the lower front teeth, not the upper front teeth as shown in the picture in Alenanno's post. Also the tongue positions in Chinese are in most cases more determined by the initials than not the finals. For example yu, qu, xu, ju have a ü proncounciation, but are both at the lower teeth. cu, su, zu have a u pronounciation, but are at upper teeth, not where it is positioned in the drawing in Alenanno's post.

In my mother tongue we also have the ü sound, and I can make it for any position of the tip of my tongue. The tip of the tongue is not important, what is important is that the shape of your tongue and lips are correct.

u on the other hand is pronounced as the oo in the English word too.

Liu is a short version for liou. So you start with pronouncing li and continue with ou (de ou of 朋友).

I used the have the exact same problem, and the solution couldn't have been more simple (worked for me anyways!):

Start to whistle. Just before you actually make a sound, freeze the position of your mouth. Now say lü.

I recognize this won't work for everyone, but I literally tried for months to get this sound right and this single-handedly did it for me.

Instead of all the ee-oo stuff. I just started spouting words, until we noticed that the vowel syllable in Jew is the same exact sound.

So now I just say Jew, but with an L instead. It works.

I would start by pronouncing lu4, with a regular u. This has your tongue touching the front of the palate, just behind your front teeth.

Now pull back the tongue as far as you can, so that it touches the BACK of the palate. Your lips should become progressively rounder as you do so. This produces the lü4 sound.

Get you mouth in the shape as if you were whistling and attempt to pronounce loo and you will get it.

You can hear pronunciation examples on MDBG (See here for lv4).

I suggest a repetition drill to practice and reinforce the pronunciation, I have made one contrasting lu4 and lu4. (Note that I just downloaded the first couple of clips I could so there are probably better pronunciation examples - It is adequate but this is more to demonstrate the drill). The drill pronounces the syllable three times with a pause for you to say it once. Then once with a pause, then once with a pause again (I.e. it is a 3-1, 1-1, 1-1 drill)

1) Start from the sound of 一 (number one) or 衣 (clothing/clothes) in Chinese correctly.

Note: this Chinese sound is different from English "ee" as in Tee (letter T). For pronouncing this Chinese sound （一）, you need to press tongue tip firmly against the lower incisors, and you also need to tense up the muscle under jaw (Digastric M. Anterior Belly) a little bit. Then produce the "ee" sound in English.

2) Keep pronouncing the 一 sound, round your lips to make a circle as small and tight as possible, as what you would need to do for whistling. Then you will get the Mandarin's ü sound.

When you can pronounce the ü sound correctly, you can add consonant l in front of ü. The l sound in Chinese is same as in "late" in English. Then you put the 4th tone on the syllable to make the sound of 绿 (lü4).

Try to prounce re [ri:] as in reboot, the result would be approximate lü1, then just make it lü4.

Drop a comment if anyone think this is a bad idea so we can improve.

16
Why is it written LIU in Pinyin, when there's clearly an O sound?