What kind of resources should a beginner look for to help with similarly pronounced words?

Serveral chinese characters sound extremely similarly to me, not only because of their vowel's tone, but, often, also because of their starting consonants. For example, I find it's very difficult to notice the difference among 彡, 山, 摻, 芟, 惉, 沾, 傹, 治安, etc. I found several tables where characters are sorted by number of strokes (chinese dictionaries), piyin (chinese dictionaries for foreigners), by frequency (resources for beginnerds), by category (books for beginners), etc. What I cannot find is a table where words are sorted by sound similarity (piyin is a kind of), so that beginners can be warned about similarity traps.

What shall I look for?

Note that I'm not asking for resources, but for tips on what kind of resources a beginner should look for.

Attempt to improve my question, after Aurus Huang's answer. It's noticeable that, for example, Spanish have difficulties in distinguishing the sound (vowels) of "jeep", "cheap", "ship". In the same way, usually English speakers cannot distinguish Italian's double consonants (think of English's "regatta", from Italian's "regata", or "benvenuTTo" instead of "benvenuto"), or Russian's "ы", "й", "и". This kind of errors arize mostly because some sounds do not exist in their mother language.

So, back to the question, I'm looking for something that says: "Warning: be careful, the following Chinese words have quite similar sound: don't make confusion!". This may be quite specific according to the learner's mother language.

Have you had problems noticing the difference between "sheer" and "cheer", or "jeep" and "cheap"? If not, then your problem is solved. For European people, it is strongly recommended that they read articles with Pinyin (literally "Spelled Pronunciation").
Why characters are not relevant to their pronunciations? Chinese has so LONG a history that pronunciations have been changed for dozens (if not hundreds) of times. Even a Chinese can't figure out why 工(gong, "work") represents the pronunciation of 江(jiang, "river"). Logically it should be, but it is not! Then Pinyin was invented to represent the pronunciation of characters. We only need to accept the fact and remember it. Leave the questions to linguists.
One more thing: You can find quite a lot of texts with Pinyin in children's books. Chinese textbooks of Grade 1 or 2 in primary schools also help. (Confucius said, you should not feel ashamed to learn from people inferior to you. ;-))
EDIT: I mean the difference of consonants, not vowels. Vowels in Mandarin Chinese is quite easy to distinguish.

For people who know a bit of IPA, you might want to consider checking this resource out: https://github.com/open-dict-data/ipa-dict

I downloaded the .dz format (Dictionary), and I am using it with GoldenDict, an open-source dictionary program.

You should get familiar with the notations used here since there still isn't a universal consensus on Chinese IPA transcription. For example, the vowel pair in Cantonese /aa/ vs /a/ may be transcribed as /a/ vs /ɐ/.

After learning IPA, it's easier for me to get to know the exact pronunciation of words in some foreign languages, as long as they have specific descriptions of the pronunciation.

And before learning phonology and IPA, I've never known many of the speech mechanism used in languages, for example: slack voice used in Hindi and Wu Chinese. IMHO, learning speech mechanisms can greatly enhance to learning of pronunciation in a language.

By learning IPA, I believe one can improve on spotting the differences and improve on their own pronunciation. 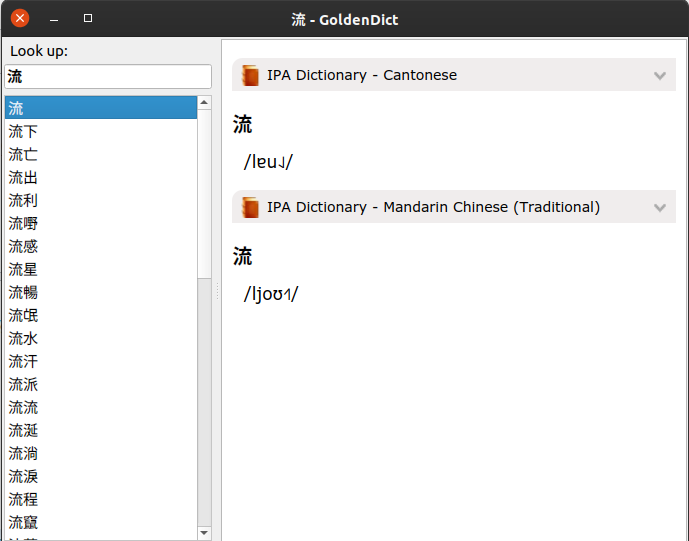 Not the answer you're looking for? Browse other questions tagged pronunciation resources or ask your own question.

3
Are there any online dictionaries that supply IPA transcriptions for Mandarin?

3
Resources listing polysyllabic Mandarin words with same pronunciation differing only by tones?
0
What are some good resources for 相声 and 小品?
6
What difference(s) does it make to use the citation tone instead of the neutral tone, for the tail character in these words?
0
What are good resources for Chinese calligraphy?
1
Should the second character in 回来了 be pronounced with second or fourth tone?