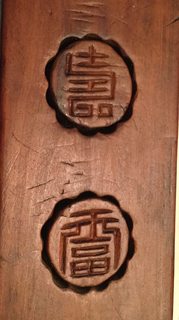 5
What do these two characters on cufflinks signify? (Characters identified: 福 and 壽/夀)
2
Help me translate the red signature seal on this picture?
0
help translating art seals
0
Help with translating a traditional Chinese calligraphy inscription
2
Help translating a Chinese character
0
Translating "for", as in "with"