Weird Chinese text next to the Great Wall [duplicate]

I was looking the Great Wall of China with Google Earth, and I found relly weird characters (that are the same size as the Great Wall) near it. I don't know what these characters mean, so here is picture if anyone can tell me the meaning. 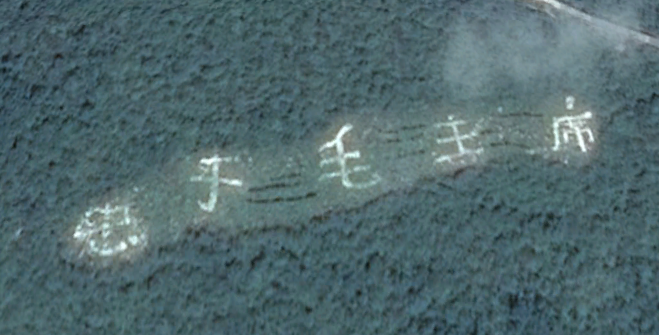 The writing says 忠于毛主席, or "loyal to Chairman Mao", 倪阔乐 says. as This has a pretty interesting history.

It is said that it was constructed by Red Guards during the early Cultural Revolution, out of rocks painted with lime. It is a famous slogan, the first part of the "三忠于四无限" movement (three loyal, four infinite), which provides the following slogans:

and the four infinites refers to the degree of loyalty to the above three:

As the Cultural Revolution ended and its legacy discredited, the writing became obscured by brush. But for whatever reason, in 2008 the area was cleared and repainted, making the writing visible again. It's placed in a very prominent position in the Mutianyu section of the Great Wall, a section that's already special as it's one of the few with merlons on both sides of the wall - very picturesque. Here you can see before/after pictures of the clearing, note that the writing is visible even from far away on the wall, as it's on the inside of a turn: 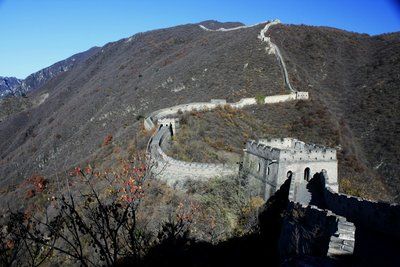 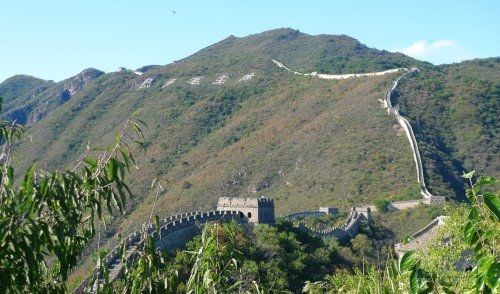 What's interesting is why the writing was restored, as usually the Cultural Revolution and its artifacts are unpopular even in China. Perhaps after so many years, it's gained historical value. Perhaps it's become popular by Chinese millenials, who have not lived through the Cultural Revolution - it was also a time where leftists like Bo Xilai were at their peak in popularity.

8
What is written in this satellite photograph? (Characters identified: 忠于毛主席)

1
What is my name?
7
Do Westerners 上火?
0
What does 九洚 mean?
0
Meaning of a seal
0
What is the meaning of 咬人猫
3
How is 那还用说！translated as “Of course!” or “That goes without saying!”?
0
What it mean the name Alexander Esam Abood in Chinese and what it is it’s calligraphy?
2
How to translate “and” to Chinese
0
What is the correct way to ask “How do I get to your school” in Mandarin?
1
Meaning of this word (Character identified: 緣)