For work, I occasionally have to translate foreign language documents. I've been running into a lot of Chinese (simplified) documents that have a date listed as YYY/MM/DD.

Why is the year only 3 digits? Is this just a typo?

By now you have figured out, why the years are represented as YYY, but just to make this post not look like many of those stubs on this site, here's a more detailed answer to anyone stumbling upon this page in the future.

Taiwan (officially styled the Republic of China) still uses the Republican calendar (or Minguo calendar), alongside the international calendar system of Western origin. This is known as 民國紀元 (民国纪元 in simplified Chinese, though not used in Mainland China). It follows the dynastic/feudal time keeping of numbering years consecutively after the ascension to throne of the current emperor, with the exception that there is no sort of emperor or king in the Republican era (although, Yuan Shi-kai made a faint attempt, and resigned from his throne almost exactly 100 years ago). A similar system is still in place in Japan, used parallel to the Western calendar, and probably even more extensively used, with era names, etc. than the Republican calendar in modern day Taiwan.

The practical way to work with it is not that difficult. Here's the formula:

So this year is 105年. For those who can work with Tradional characters, here's a sophisticated online calculator. Here's the output for this month: 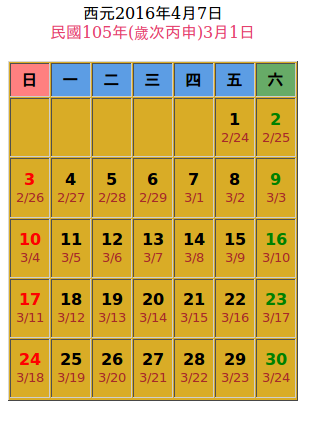 (The bold face digits are the days according to the Western calendar, the smaller digits show the month/day in the Chinese calendar, in this case the lunar calendar is used, which is the basis of observing Chinese New Year, etc.)

This elaborate system of Chinese time keeping and age reckoning have their many intricacies, but the above is probably enough for you to get the gist.

2
What is the exact meaning and etymology of 拜年？
3
Are there any good reverse transliteration strategies?
3
Issues with machine translation from Traditional to Simplified (not vice versa)
1
What's the Most Likely Chinese Version of this Odd “Chinglish”?
3
Pinyin to Chinese characters
0
Sort by date translations?
0
How to translate “inclusive” and “exclusive”?
2
How to say “Exactly” in Chinese?
1
How to say “home improvement” in Chinese?
5
How to write and structure a modern professional follow-up email like a native Chinese speaker?