I've tried a number of online and paper dictionaries (Chinese-Chinese character dictionaries) and I still can't find this character. Since I don't know how it's pronounced or what the right part is called, I have attached a representation of the character I drew:

This character is used many times over in the grammar book I'm reading, mostly in example sentences on 把 usage. The only time it occurs with any kind of context is 他有的時候把[X]當糖吃. Can anyone tell me what this character means and how it's pronounced?

There is something weird going on with 塩.

I checked many dictionaries (both online and offline, and both from the mainland and Taiwan and it seems that 塩 is an old variant of 盐|鹽 (See for example Zdic and 汉语大字典) meaning salt and is currently no longer used as a Chinese character, but it is still used as a Japanese one.

Since it currently not used anymore (both on the mainland and Taiwan), it is normal that you can't find it in any Chinese dictionaries.

This being said, I asked two Taiwanese friends whether they knew this character and they all recognize it and thought it was the simplified form of 鹽 used in mainland China. I also asked some mainland friends and they don't recognize it.

This character is the shinjitai form of 盐/鹽 used in modern Japanese (pronounced えん for chemical salts or しお for common salt).

In Chinese, either simplified or traditional, it is obsolete, according to Hudong and Zdic, which means it is no longer in contemporary usage. Its use in your grammar book would therefore seem incorrect.

There are some exceptions to this rule, however. If you do a search online for 雪塩燒, which is a type of food consumed in Taiwan, you will find many instances where it's written with the Japanese kanji (although there are equal number of instances where it's written with 鹽). The food item obviously has its roots in Japan and it's possibly the reason why its name has preserved the Japanese kanji character in some instances (for branding purposes or simply fashion, who knows).

One way to look the character up is by using the IME Pad. The radical has three strokes while the remaining part has 10. Unfortunately IME didn't give the pronunciation this time, so I had to look it up in an online dictionary. 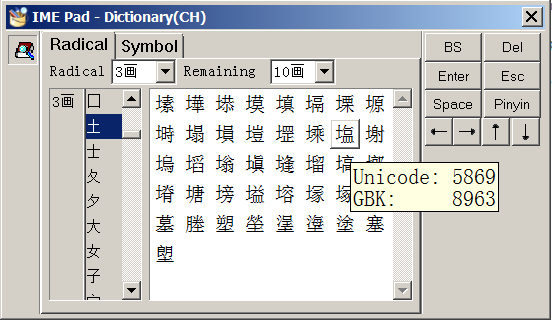 Not the answer you're looking for? Browse other questions tagged character-identification or ask your own question.