A unified theory of 就 meaning

就 always bothered me. I couldn't (and maybe still can't) get a hold of its meaning.

By looking at many examples of the usage I came to realization that 就 marks a process of becoming a subject to or beaing subjected to someone, something, some situatuion

Proper translation in the light of my model would be something like this:

By the way 就 can serve as a measure word for wrappings of a coil or a thread: 繁纓七就. Can any one explain why? Is this function a new construction or an ancient one?

marking something as a subject of actions:"

在深夜发出的电邮里，奥巴马总统或许会,就他阅读的备忘录, 提出措辞尖锐的问题 Obama's night-time emails with questions, subject to what he read before, are sharp and super smart.

Now that's a question! Why the hell "tall building + very" became "to become a subject"?! One guy said: 请教：三窟已就的“窟”是高层建筑？是不是和莫高窟一样的. So I've looked at the 莫高窟. Well, it looks like this: 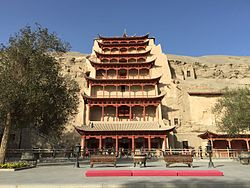 and this really looks like an ancient way of writing 就:

according to humanum. Why this super tall building means to become a subject? Maybe this meaning comes from being a "subject to God"?

Any info about the subject :) will be appreciated. I would also love to hear natives opinion on my idea.

P.S. 就就 meaning remains a riddle for me. Can any one explain why this thing means what it means? 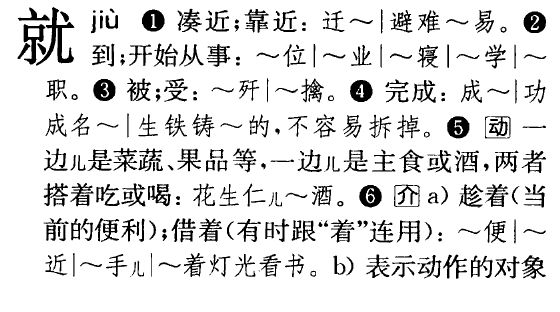 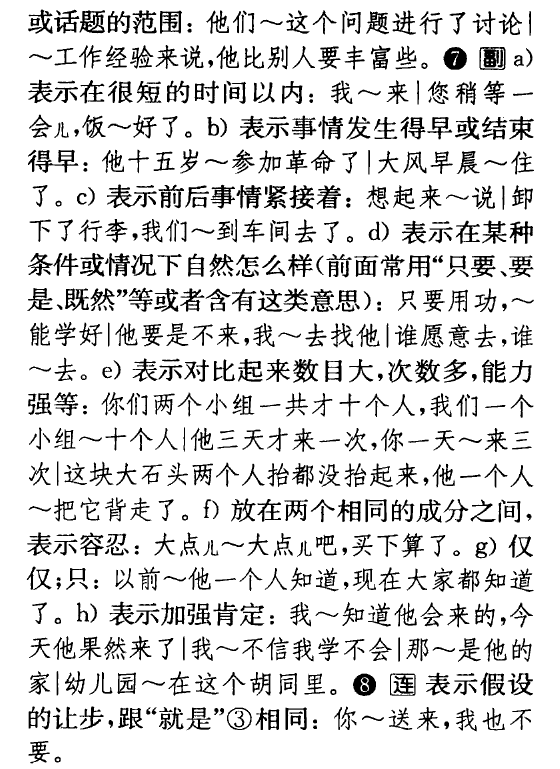 Besides the meaning items of the character itself, the dictionary also listed 32 words beginning with 就. I didn't list all of them. 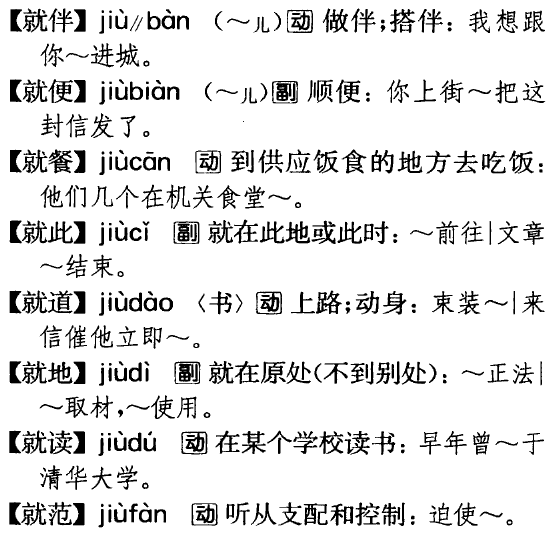 Based on my own interpretation, I can't find the very one base-meaning from which all other meanings derive. But it seems that compilers(and the sholars behind them) of Contemporary Chinese Dictionary, 6th Edition think all the modern meanings of 就 come from one common origin, though they didn't tell us what the one common origin is and how the other meanings derive from that origin. About this point, you can refer to @congliu's answer to 足: why is “foot” also “enough”? for detail. I copy a sentence from his answer: "Those whose form or pronunciation are the same but no relation between their meaning, basically will be in given different entries, with superscripts on their upper right corner. For example, '耳1' and '耳2', '安1', '安2' and '安3' ". This is a rule followed by all authoritative Chinese dictionary, including Contemporary Chinese Dictionary, 6th Edition of course. But as we have seen, all the 8 meaning items is listed under only one entry of 就, no superscrpts, no separate entries. So we can infer that the 8 meaning items are related and come from one common origin. Of course, there exist other possibilities. Maybe there are several distint roots of the meanings of 就 but the scholars haven't reached agreement on this topic now. No matter what the fact is, we can always make our own guess and try to find some formula for mnemonics.

In the following contents, whenever I mention the classification of or relation between the meaning items of 就, it's all based on my own interpretation and may be subjective.

Some of its 8 meaning items seem related to each other, some not. I'm inclined to classify item 1,2,4 to one univeral category, meaning approach / get to / become. Most of the 32 words begin with 就 can be classified into this catetory. When 就 is used to make up a word in which 就 is followed by a noun, you can usually reason that the meaning of 就 falls into this category. For example, 就位(take one's place)，就业(take up an occupation)，就寝(go to sleep)，就学(go to school)，就范(submit to control, give in)，就木(get to wooden cascket, to die)，就医(go see the doctor)，就餐(go to eat)，就义(get to righteousness, to die as martyr).

Item 3 seems unrelated to any other ones. If 就 is used to make up a word in which 就 is followed by a verb, then you can reason that 就 means passive. For example, 就歼(annihilated)，就擒(captured).

Item 5 seems unrelated to any other ones. (就着菜吃饭. Eat dinner together with vegetables.)

Item 6 seems unrelated to any other ones. (a: 就近 do something in the neighbourhood/without having to go far for convenience, 就便 at somebody's convenience/while you are at it. b: 就我所知 so far as I know. 就目前的情况看来 in the light of present situation)

Item 8 seems unrelated to any other ones. It says it's same with 就是(3). I'll talk about 就是 in more details later.

Sub item a,b,c,d seems related to each other, all have the meaning about time/sequence.

Sub item e seems unrelated to the other ones.

Sub item f seems unrelated to the other ones.

Sub item g seems unrelated to the other ones.

Sub item h seems unrelated to the other ones.

About 就是： 就是 as a word has three meaning items.

Something more about 就是: in the phrase 就是他(Who broke the window? It is him! [pointing to him])， 就是 is not deemed to be a word, and can't be explained by any of the three meaning item of 就是. Instead, here 就，是，他 are three seperate word. 就 falls into meaning item 8 sub item h. That is, 就 means emphesis. We can just say "他!(Who broke the window? Him!)", or "是他(It's him!)", or "就是他(It is him!)". We can also say "就他!". In this case, it's legitimate to use 就他 in place of 就是他.

With regard to 就他(follow his wishes) and 就你(As you wish!), I guess 就 means 迁就(accommodate oneself to, yield to, give in to) here. But 迁就 is a word as a whole and can't be abbreviated to 就. I can't find any example using 就他 as "follow his wishes" or 就你 as "as you wish".

About 迁就: This word means accommodate oneself to, yield to, give in to. 迁 means move, 就 means approach (Item 1). A迁就B literally means "A moves himself to approach B (at B's convenience)", and extends to mean "A accommodate himself to B" / "A yields to B".

About 就 in 繁纓七就: 繁纓七就 comes from Book of Rites(Simplified Chinese: 礼记. Traditional Chinese: 禮記), a collection of Chinese classic texts dating back to Zhou dynasty (1050–771 BC) in China. So obviously this meaning is an ancient one, and no longer used today, or it will be listed in Contemporary Chinese Dictionary, 6th Edition.

The primary meaning for 就 in Japanese (which as you may know often tends to keep the Classical Chinese meaning for characters) is to "stick to", "arrive at", "become (something)" and is related to a word that is written with 「従」（从） meaning "follow" or "obey", .

From that perspective I think your theory holds up well.

I would say that these meanings could be reduced to two basic underlying concepts which are related:

To use some of your examples:

The basic meaning of these kinds of phrases in context could be:

These meanings can be viewed as being derived from the concept of "arriving" in the sense of "completion" or "completeness", as in "only him" or "only his" and "just him" or "just his".

就 the character is a pictorial rebus of a tall building that stands out, a great edifice, if you will.

《说文解字注》 writes: "廣韵曰。就、成也。迎也。卽也。" 成 means "accomplish/achieve," you can still see it in 成就. 迎 means "face toward" and 即 means "get next to." Of these meanings, the last two can easily transit to "be subject to," but the first one doesn't fit.

But If we look at the below example, all meanings are actually possible:

So what does that mean? I think it means 就 started out as a construction term, meaning to finish the construction. It then came to mean to "reach for" or "reach" any objective, and it is in this sense that you are subject to it:

I think this gives a more general explanation than "be subject to," even though that is where most modern uses have gravitated toward.

From a letter of John Renfroe, CEO and Co-founder, Outlier Inc.

I haven't looked into this character very much, but on a quick search (meaning I read the entry in 說文新證), here's what I've got.

The ancient form in your post on stack exchange is 亯 over 京. That's how it was written from the Shang dynasty through the Warring States period. In Qin, it was written 京+尤 or 京+又 (examples of both exist). The reason they wrote it differently is unclear.

The Shang version depicted a tall building. The character meant "to reach high," from which "to reach/arrive," "to accomplish," etc. were derived.

I'd guess (keep in mind this whole paragraph is a guess, not based on research—I haven't looked into it enough yet) that in 就學 or 就職, the meaning is "to undertake" as an extension of arriving (at school or work). Not sure about the grammatical uses but "at once" isn't too much of a stretch from "to arrive" (consider 馬上 "immediately", but literally "on a horse" as a metaphor for "happening/arriving quickly"), and "already/as early as" isn't much of a stretch from "at once". I'd have to look into it a lot more to be sure of how the meanings are related, but it looks like you and other posters have made a good start.

I've attached the relevant entry from 季旭昇《說文新證》 to this email. It isn't very high-res, unfortunately, but it should be legible. Note this is an old edition—I don't have the most recent edition with me right now—so his position on this character may have changed since then. At any rate, it's a good starting point for this kind of research and may interest you.

Also note that I'm not claiming he's right—I'd have to do a much more exhaustive search to verify. That said, 季旭昇 does excellent work and is generally very reliable, so it's a good source. 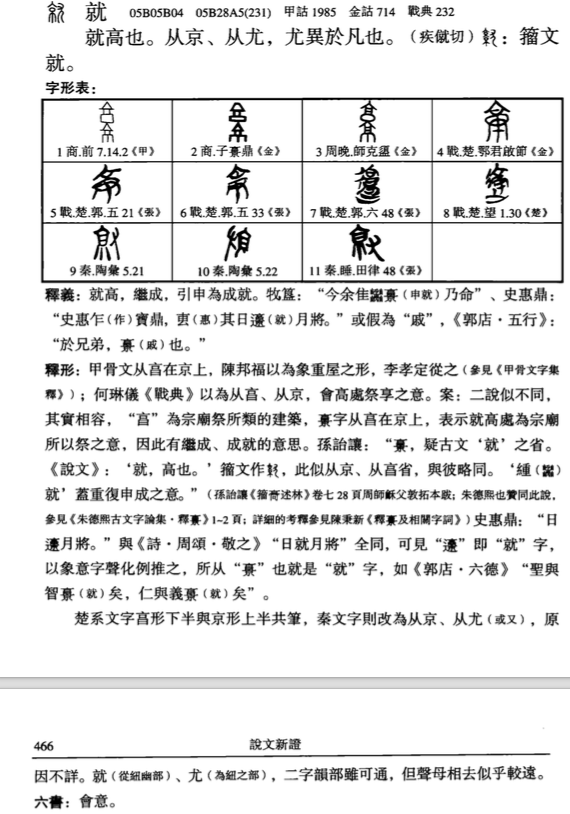 I think after 3 years I've cracked it. My original post is wrong. 就 is not "subject". It's more simple than this:

Arguments for this point of view:

1) I have found some rare etymology article about 就:

就 - As per 尤 (contracted hand) + 京 metropolis → contract the arm in summoning people to a metropolis → settle; take up → take/get a job; take instruction; embark (upon) (← take up) → appoint; provide service for → arrange. Also, seat (a guest) (← settle).

"三窟已就" means "all three holes have been completed".

It comes from the etymology of "狡兔三窟", originated from 戰國策.

A rabbit has three/several (according to the origin, it is indeed three) holes to live in, so if one is destroyed/occupied, it can still live in others. This is a metaphor when an adviser advises his master not to be overdependent on his current source of power (or to get satisfied with the current stability without preparation in case something wrong happened) (his current source of power is the position of a powerful official)f, that he should have three reliable sources of power (eventually, the two other ones are the support from citizens/former debtors and the position of a general in another country).

"三窟已就" is when the adviser reports that "all three rabbit holes have been constructed" (and now you can be relieved).

Not the answer you're looking for? Browse other questions tagged meaning etymology history glyph-origin old-chinese or ask your own question.

26
Why is 足 both “foot” and “enough”?
2
How to translate 就 into English as in 这就是个很好的例子?
3
Does 现在 make 就 redundant in “你现在就去做。”?
1
Usage of 就 after a noun and before a verb
0
What exactly does 就 mean in combination with other words?