The catch: Since every book says that 就=即 I considered to create a new sentence out 交易即告成立 by switchin characters.There is no instance of 交易就告成立 have been found by me as of yet. But it should I hope bring the difference between 就 and 即 to the surface.

Some of my reseach: As far as I know 即 the core meaning is "identity". It seems this character has been merged with 卽(to eat, fast) on the basis of sound and similarity of composition.

Here is the saying from some Buddist book:

道遠乎哉。即物而真聖遠乎哉 “Is the Way far away? Reality is wherever there is identity with things”

another example from some modern manual:

P.S. please, don't tell me it's about food. Or if you do explain how food has something to do with "identity".

P.S.S. IMHO I would say that 即 looks more like a man hunching over tracks on ground 艮+卩. IMHO. IMHO.

Legally speaking, “即告成立” means that transaction or deal takes effect upon the elapse of that seven days.

The wording I propose should be acceptable in most cases for such translation.

The only difference between 交易就告成立 and 交易即告成立 is that the former is more used in spoken language and the latter in written language. 即 in 交易即告成立 is a very formal word and functions as an adverb, meaning "right away/at once/immediately/thereupon". When 即 is used in this sense, usually it can be replaced with 就. There is no difference between 即 and 就 in their meanings or grammatical roles in this case. Another example:

It took the police only several days to break the case. 该案仅几天即告破/该案仅几天就告破(了).

Your native friend may simply base his/her answer on intuition. If you need an exhaustive explanation, you'd better refer to some Chinese grammar books. @user6065 gave a good reference book 汉语800虚词用法词典.

I beg to differ with @wpt's claim that the use of 就 in 交易就告成立 is a misuse influenced by dictionary definition.

Here is the definition of 即 in Contemporary Chinese Dictionary, 6th Edition, page 605. 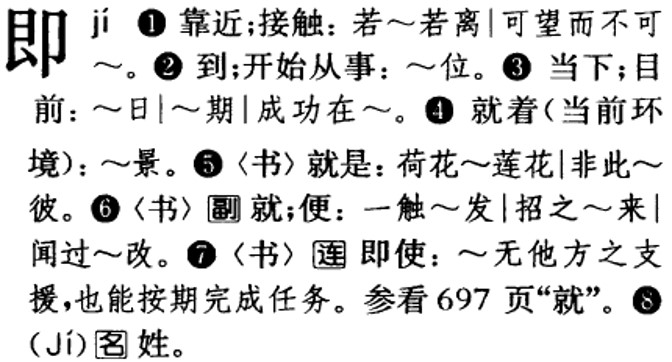 <书> means this meaning of 即 is usually used in written language. [副] means 即 is used as an adverb.

Here, the dictionary used 就/便 directly as the explanation of 即. That's just because 即, 就, 便 all have the meaning of "right away/at once/immediately/something happens soon after another". Except for some idioms and Chengyu(成语), wherever you use 即 in this sense, you can use 就 or 便 in place of 即. The three words are interchangeable grammatically and semantically. As I just said, the only difference is that 即 is more formal than 就 and 便.

There is a paper on the evolution of 即, 就, 便 from verb to function word (adverb and conjunction). cf. “即”、“便”、“就”虚化过程中的错项移植. With regard to when 就 was first used as adverb, the scholars haven't reached an agreement. The author of this paper believes it's no later than Song dynasty (960-1279).

即 (which is) is a word particle, it can also mean:

就 (be then) is a word particle, it can also mean:

就 and 即 are quite different, and the usual dictionary definition of 即 = 就 is misleading in many cases (but not all).

The most important thing to bear in mind here, I think, is that 就 is most common as a temporal adverb (contrasting with 才). It is a "free morpheme" in the sense that 了 is a free morpheme; within the syntactic limitations that "temporal adverb" imposes, it can be used without restriction. 即 is not a free morpheme. It is literary Chinese, and its use in the Modern Standard Chinese is usually restricted to set phrases such as 可望不可即, 即位, etc.

In your example, 即告 is such a phrase, now used only in legal terminology to mean "immediately take effect". Influenced by the dictionary definition, some do indeed substitute 就 here, but this is a recent "misuse". According to Google's very inaccurate estimates, there are 4000+ instances of 就告成立 found by the mighty google searchbot. These are mostly from books or blogs that are dated after 2000. For 即告成立, there over 250,000 instances, with no such temporal restrictions.

Based on this stark contrast, I don't think that 即告 has yet been superceded by 就告. If you want to use 就 with this sort of legal meaning, consider using the Modern Chinese compound 宣告, instead of just 告 (also classical, not modern). Googling the phrase 就宣告成立 gets 27000+ examples. This is less common than standard legal terminology, but better than the perverse 就告.

Not the answer you're looking for? Browse other questions tagged meaning etymology or ask your own question.