I know how they are used, but I don't understand how they differ in meaning in sentences like these. Eg.

Also, I came across this a very long time ago and had even asked a Chinese native friend why 的 is used here because it denotes possession. But she couldn't explain me very well. I feel my question is somehow related to this.

Another one of such kind is:

Now here, should this 得 be used? It's very confusing and I often come across such sentences with this 的 and I fail to understand why it's being used there.

的 generally expresses possession or modification and 得 is used after a verb or an adjective to express possibility or capability.

Here are some literal translations that should help to differentiate between the two examples that you listed:

In general, that which comes before the 的 modifies what comes after it:

The 的 ends up forming a complex subject:

得 is generally used in the following pattern to describe the degree to which something is done: [Subject][Verb-Object][Verb 得][Adverb].

With the dialogue that you provided, the "的" should actually be "得". It seems to just be a typo.

With the third example, 得 should not be used. 的 is correct here, but it can be confusing because there is an implied/omitted noun. The thing being modified isn't said explicitly and all that is said is the modifier.

Here is another example dialogue:

Notice how "书 / books" is not repeated. Once the object is clearly in context, both speakers drop it for convenience and brevity. Natural human speech tends to be like this. It would seem quite odd to say everything explicitly since once something is in context, repeating it can seem unnecessarily redundant.

The Chinese that I speak is fluent. 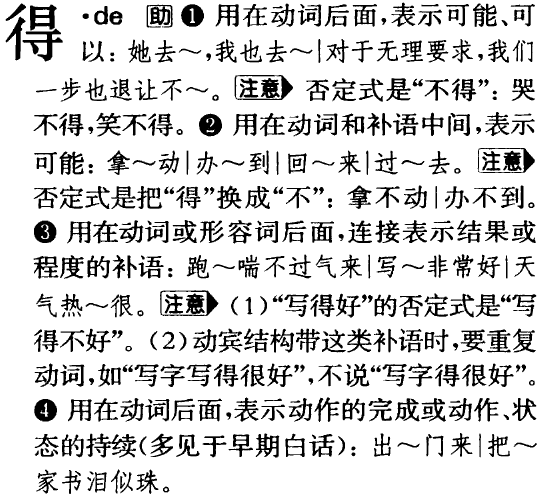 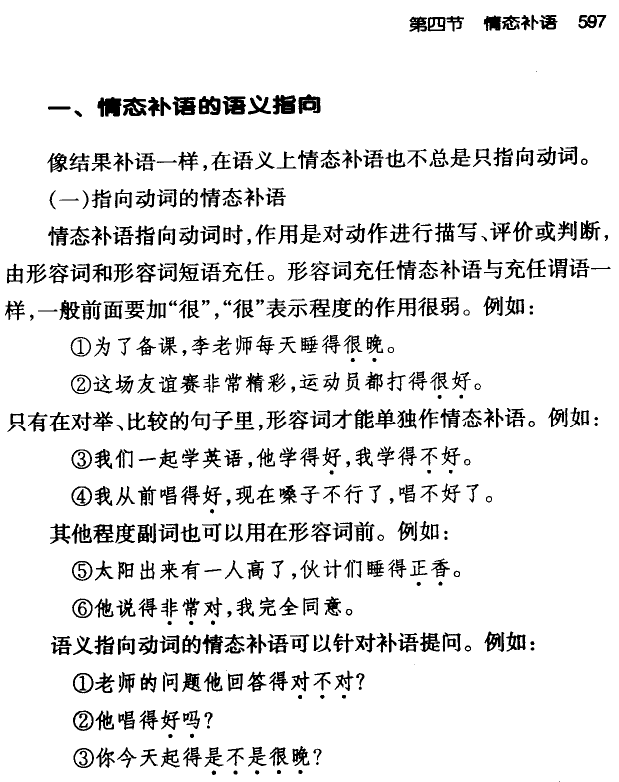 Exmaples from top to bottom:

Not the answer you're looking for? Browse other questions tagged grammar difference or ask your own question.

2
的确, 确实, 实在, and 真正: what's the difference?
3
Can you explain the differences between the following sentences?
1
Where to put location words in a sentence
0
Grammar/meaning of 好 in ”怎么才能唱好歌?“ ？
2
Confusion about the usage of hěn
4
How to express: a narrator is narrating an event in the past, and wants to describe an event 2 years before that
2
What does 是 in these sentences mean?
3
What is “语气词”? Why does this question end with 嘛 instead of 吗?
5
What's the difference between 记录 and 纪录, both pronounced jìlù, and both meaning “record”?