Are there any original sources documenting the simplification process?

I am familiar with the most common ways characters are simplified, but sometimes I am not completely sure what the thought process was. For example, with 邊 to 边, 力 is not a novel phonetic component, nor does it resemble the 草书 form of 邊, and as far as I know it's not a historical variant, so it appears like a mostly arbitrary replacement to me.

The 简化字总表, the list of simplified Characters published by the Chinese government, is the only original source I know of regarding simplified characters, but it only shows what the simplified characters are, and provides little explanation for the reasoning. Is there any source that documents the reasoning behind simplification? I imagine there was a committee that discussed it, and there had to have been some written correspondence about it. Are there any sources like that available to the public?

Simplified Chinese is no stupid command from "communist overlords". There was a committee discussing simplification, and they did choose simplified characters with academic discretion. I have found this semi-official book for explaining the sources of almost each simplified characters, plus the history of Chinese character simplification from Qing Dynasty:
《简化字溯源》(Tracing the Source of Simplified Characters), published by Language & Culture Press, 1997. (It's not an English book, but this is all I can think of. )
You can borrow it from a library, or buy it online for about $6.
Edit:
For those who think Simplified Chinese is a brutal command from the "red evils":
Chinese simplification is a process that started thousands of years ago, which has been performed by various regimes, not just the Communist China.
Lishu(lit. "slave script") is the best-known simplification in Ancient China, promoted by Qin Shihuang. Before that, Xiaozhuan(lit. "minor seal (script)"), which is more complex with round and delicate curves, served as the official script (after Qin unified China).
In 1935, the KMT government had drafted a proposal of simplifying Chinese, which contains about 500 characters as the "first batch". Most of them were accepted by the current Simplified Chinese. It was rejected because Dai Li, the head of intelligence, strongly opposed the proposal with the reason "Simplified Chinese is abomination to the ancestors".
The current Simplified Chinese was sometimes called Yi-Jian ("First Simplification"), because there were Er-Jian ("Second Simplification") during the early 1980s, which was really a disaster. The Second Simplification was made in a hurry, with a lot of simplifications that may cause confusion, violate the principle of making Chinese characters, or be just too ugly. People around China also invented their own simplification arbitrarily, which brought more confusion. The Second Simplification was terminated in mid-1980s, and the standard Chinese script was rolled back to the First Simplification.
What I'd like to say is, Simplified Chinese we use today may be imperfect, but they're so widely used and tested in daily life, and it is the best existing solution besides Traditional Chinese, with less complexity, and introduces minimum confusion. It can be left today because it is based on extensive research and respect to the principles.

For example, the simplification history of 愛 to 爱. 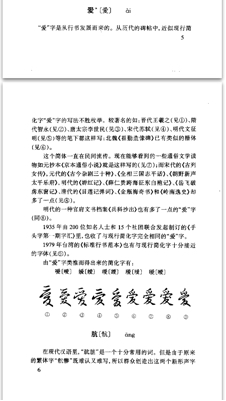 It's frustrating and even disgusting that the topic on simplified and traditional characters has now always been a quarrel due to political correctness, ideology, bias or even just ignorance, or what I may call 'pretend to be blind'.

The image quality is poor and it's in Chinese, so I try to give a brief interpretation of this page.

爱 originates from 行书. There are countless variants similar to the present 爱 in the ancient writings, printings and carvings. Here are the famous ones.

The form 爱 was widely used by the folk and could be seen in many folk literature works.

Both traditional and simplified characters are precious legacy. It was not CCP but the Chinese ancestors that invented and used these variants. In 1935, KMT government launched to make a standard of simplified characters but this project was then cancelled. After 1949, CCP took over this project and finally made it. In 1952, Chiang Kai-shek proposed it again in Taiwan but was opposed and came to nothing. Today Japan uses Chinese characters, kanji, some of which have also been simplified.

1
Is the visual similarity of the simplifications 華→华 and 畢→毕 a coincidence?

3
Simplification of 蘭（兰）
8
Writing in Chinese - What rules are there for handwriting vs printed
2
Is There A Way To Say "Fro" (as in afro/fro) In Traditional Chinese?
2
In ancient China, was there an equivalent of pinyin?
8
Examples of "bad" simplified characters/简体字?
2
Do the Chinese have text speak?
3
How to tell Simplified and Traditional Chinese apart?
3
Is there any font encoding the second stage of simplification?
4
What are the earliest examples of "simplification"?
1
Has "⿰面了" been suggested as a analogical simplification of 䩍?