Both are widely used among the Chinese people, which one is the correct one?

Here is the summary of google hits on each term, including both Simplified and Traditional Chinese. Blue is for 发大财, and red is for 大发财: 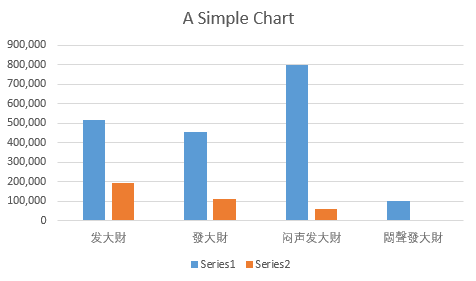 So apparently 闷声发大财 is more ubiquitous, both in Simp. and Trad. Chinese.

But it is not a problem of correctness. Nothing is grammatically wrong in either form. There might be something slightly off for 大发财 because it doesn't conform to similar phrases like 吃大亏, 撞大运, etc., but it's not that important. The thing is, even if 大发财 was indeed the original form, 发大财 has already become an internet meme, and there is no way to stop that.

After careful listening, I think there is not doubt that the Chairman did say 闷声大发财. The pronunciation of 发 is hard to dismiss if you know how 入声 works.

However, there are like 1 billion native 官话(Mandarin in the broader sense) speakers who can't distinguish 入声. Also verb + 大 + object has always been a prevalent form. These could be why the 闷声发大财 version gained it's popularity.

The original phrase should be 「悶聲大發財」, I read it in the most famous martial art novel 『鹿鼎記』

In Chinese myth, there are two Hell officers 黑無常 and 白無常，people refer the pair as 黑白無常 or 無常鬼，they wear tall hats and the phrase 「一見發財」is written on the white one's hat. Since 無常鬼 do not speak, 「悶聲大發財 」actually has double meaning of " stay silent and get rich" and " silent like a ghost"

The reason for so many Google results for 悶聲發大財 was because 江澤民 said it that way on T.V. Consider 「質素」( quality) is written as 「素質」in Mainland China, it seems like they have a habit of phrasing things differently from the traditional Chinese.

发大财means make a lot of money. You can say 大here means a lot. Usually we don't use 大发财，because 大 is usually an adj. to describe the noun.

Since 江泽民 said 闷声发大财 on TV, it is more popular in Chinese

Not the answer you're looking for? Browse other questions tagged vocabulary idioms or ask your own question.

6
What are the corresponding titles for "Dr." (in the sense of MD and PhD) in Chinese?
0
Which version is correct, 脚趾甲 or 脚指甲?
9
Politeness in referring to a recent death
5
When should 叉 or 岔 be used when talking about a forked road?
4
What is the difference between 翼 and 翅膀?
1
are there region specific idioms?
6
Idiom, common phrase crossword puzzle challenge
2
另當別論 : 另, 別 superfluous? What does 當 add?
0
What literary device would we associate with the aforementioned Chinese old fashioned way of greeting? ( (Chī le ma) ? )
0
Distinguishing 忙 and 盲 from spoken Chinese