In particular, there should be many examples of 形声字 ("phono-semantic compound characters") which were "damaged" by simplification. I am interested especially in characters where a 声旁 ("phonetic") or 形旁 ("signific") was partially removed in such a way as to provide misinformation.

(Note: this is not intended as an anti-简体字 post!)

for 形聲字, the simplification made severe, unrepairable damages to the chinese culture.

while 堇(u+5807) is a character since oracle script, 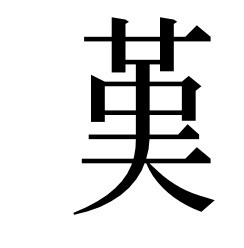 back to the phonetic component 堇. in cantonese, 堇 is pronounced as gan2 sound file, which has the 韻母 (final) "an".

so, characters share this phonetic component 堇, guess how they pronounce?

after thousands of years, the 韻母 (final) of these characters are changed slightly from "an" to "aan", isn't marvellous?

therefore, the simplified script of 难, 叹 & 艰 lose the phonetic component 堇; that no-one in modern time, or generations in the future would associate the correct pronunciation from the component of the simplified character.

lastly, i think that this question is excellent; i worried about the temporary "hold on" status of it. may i ask the rationale of this decision?

The simplification introduced some inconsistency.

Once I wanted to type the word 芦苇(reed). I use wubi input method, which is based on the structure of characters rather than their pronunciation, so I need to break down the charecter I want to input into components. I thought 芦 should be written as

, so I broke it into 艹、卜、尸. Of course, I didn't get the expected character with these components. I got rather confused. Finally I had to resort to pinyin input method and found that it is 芦 instead of

For your information, Chinese glyph has another form, call Cursive. Which become fundamental of so "simplified Chinese".

So the simplification is not born from nowhere (as in Chinese proverb , pop up from the stone), it has it own historical and literature traits.

Most of the old cursive can refer to 《标准草书》

Nevertheless, the cursive glyph are wrote with added creativity, it is not easy even with the simplified word reference book.

Nevertheless , the whole writing things is heavily politicalised. Since pin-ying and handwriting recognition become norm, the original mandarin might re-emerge back to mainland China mainstream usage.

Not the answer you're looking for? Browse other questions tagged etymology simplified-chinese traditional-vs-simplified glyph-origin or ask your own question.