How many different dialect known to exist in the Chinese language and what are they?

From what I know there is Mandarin, Hokkien, Cantonese But are there other minority dialect? I've heard one spoken outside the mainlands, can anyone confirm?

yeah there are a lot of them: Cantonese is spoken by people around guangdong（广东）area, Hokkien is spoken by people around fujian（福建） area. There are also Mongolian Language spoken by inner mongolian （内蒙古） people, Tibetian Language spoken by tibet （西藏）people. These are the most famous one i believe, there are still a lot of them since china consist of many clan and area. Every clan and area have there own language 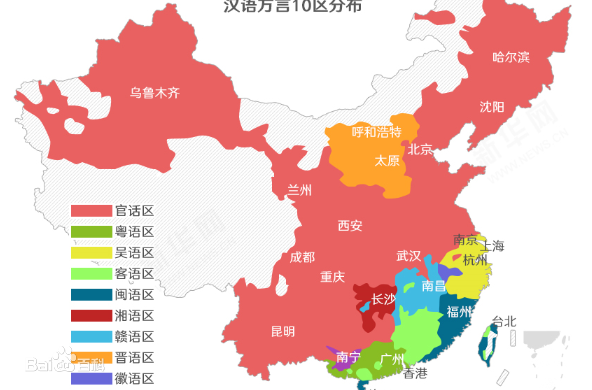 But they cannot describe all the dialects. For example, Mandarin-Similar Dialect includes 东北话(Northeastern Dialect), 陕西话(Shaanxi Dialect), 云南话(Yunnan Dialect). They are quite different in Chinese people's opinion. So these 7 kinds have many smaller kinds of dialects, such as 吴方言, has 6 dialects, including 太湖(Lake Tai)/台州(Taizhou)/金衢(Jinhua-Quzhou)/上丽(Shanghai-Lishui)/瓯江(Oujiang)/宣州(Xuanzhou) 片. So, in fact nobody can confirm the exact number of Chinese dialects.

There were no Mandarin Chinese speaker several hundred years ago in some areas, even now, some people in Tibet cannot speak Mandarin well. So there's no dialect in Tibet, Xinjiang and Qinghai.

There are many, many dialects. Most individual provinces, regions, cities, and even parts of cities have distinct dialects.

There are nine main varieties of Chinese.

Firstly, we have Mandarin. It has the sub-branches (all of these can be divided into many distinct dialects) of Northeastern Chinese (Dongbeihua), Beijing, Ji-Lu (of Hebei and part of Shandong), Jiao-Liao (rest of Shandong and the Liaodong peninsula of the Dongbei), Lower Yangtze (Nanjing area), Central Plains (Henan, Shaanxi, northern Anhui and Jiangsu, southern parts of Xinjiang, Shandong, Gansu, Hebei, and Shanxi), Lan-Yin (Gansu, Ningxia, and Xinjiang), Southwestern Mandarin (Sichuan, Yunnan, Chongqing, Guizhou, parts of Hunan, Guangxi, Shaanxi, and Gansu), and Huizhou (a few counties in Anhui, Zhejiang, and Jiangxi).

Pinghua is another group of Chinese (sometimes classified as Yue), spoken mainly in Guangxi province, and has elements from the Zhuang languages in the area. Its two main dialects are Northern Pinghua (Guilin) and Southern Pinghua (Nanning) which are not mutually intelligible.

Hakka is another group of dialects spoken in both Taiwan and the mainland. In Taiwan, the main dialects of Hakka are Sixian, Hailu, Dabu, Raoping, and Zhao'an. In the mainland, the prestige dialect is the Meixian dialect (Meizhou), and other varieties include Wuhua, Xingning, Pingyuan, Jiaoling, Fengshun and Longyan.

Another group of Sinitic varieties close to Gan is Xiang Chinese, spoken mainly in Hunan province. Xiang varieties include Chang-Yi (Changsha dialect), Lou-Shao (Loudi dialect), Chen-Xu, Hengzhou, and Yong-Quan. There is also an interesting distinction between New and Old Xiang.

Hope this helps. Sorry for the long answer.

Not the answer you're looking for? Browse other questions tagged topolect or ask your own question.

12
Are there differences in writing between Chinese languages, such as Mandarin and Shanghainese
19
Why Cantonese is considered as a dialect of Chinese?
5
Are there any resources for learners of Chinese dialects that are close to Mandarin?
6
Looking for very common dialect words that have no Standard Mandarin Chinese hanzi characters
2
The most used Chinese dialect on the Web?
5
Is it correct to say the standard for written Chinese is Mandarin, regardless of dialect (e.g. Cantonese)?
5
Which dialect of Chinese has the fewest tones?
3
When is a 方言 a language and not a dialect
2
On average, how literate in Mandarin are overseas Chinese?
1
Is ㄙㄨㄚˋ (sua4) for the character 嘴 from another Chinese dialect or language?