Is there a dictionary of standard character variants?

Is there a (paper or online) dictionary/list that contains standard variants of Chinese characters next to each other? That is, the Kangxi Dictionary forms (正字／康熙字典體), the forms recommended in mainland China, Taiwan, Hong Kong, etc. It would be great if it also showed the characters in different fonts (宋體／明體、黑體、楷書、行書、草書、隸書、⋯⋯), but I'm afraid it may be too much to ask. I know about the Dictionary of Chinese Character Variants, but it doesn't seem to contain that information.

For example, I'm looking for a dictionary that would illustrate differences between Hong Kong and Taiwan, such as in this picture (Hong Kong on the top, Taiwan on the bottom, source: CLIAC): 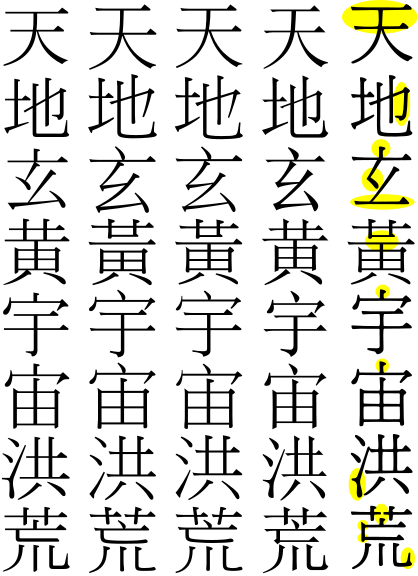 14
Is any simplified character also a traditional character?
18
Characters which have several different shapes
10
Which IMEs (input method editors) are actually most used in each of PRC, ROC, and Hong Kong?
5
What qualities does Hong Kong Mandarin have?
7
Is there an authoritative list of most frequent to most infrequent pronunciations for individual Chinese characters?
5
Is there a politically neutral Chinese term for Greater China that is acceptable to all Chinese speakers?
3
Pronouncing pinyin "ing" (bopomofoㄧㄥ ) as /iŋ/ or /jəŋ/ e.g. in 冰
2
Creation of Chinese characters throughout history?