How to say emojis in Chinese?

We have tried different translators with no luck. Is there any translation to Chinese? Do we have to write the English version like Sim Card?

Yes, you can use emoji directly. And it's usually translated as 绘文字 (from the Japanese 絵文字).

You can also call them as emoji表情, or 表情符号/表情图标 for more general intent.

Google translates 'emoji' as 表情符號, I think it is an acceptable translation.

The term Emoji originated from 絵文字 in Japanese. Since Japanese Kanji came from Chinese characters, 絵文字 can be reverse import back to Chinese. Which mean if you say 絵文字 in Chinese, people would know you are talking about emojis.

Most people say "emoji" without translating. While many use "颜文字" for "emoticon" (from Japanese 顔文字 kao-moji), we almost never really say "绘文字". A semantical translation might be "表情图" ("graphical emotions"), but it's not really equivalent to "emoji". So, you could just use "emoji" as is.

表情符號 is the best translation for the type of emoji mentioned.

Or, you can directly use the English word emoji orally or in informal writing.

iOS 10.2 [...] Emoji have been beautifully redesigned to reveal even more detail and over 100 new emoji have been added including new faces, food, animals, sports, and professions. 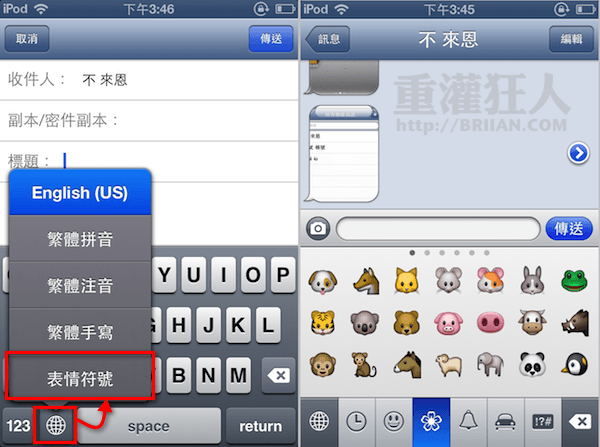 3
How do we translate the Chinese slang “抠脚大汉” into English？
8
What is written in this satellite photograph? (Characters identified: 忠于毛主席)
3
How do I say "The story has to have a moral"?
8
How are ambiguous “brother” and “sister” typically translated into Chinese?
5
What do these two characters on cufflinks signify? (Characters identified: 福 and 壽/夀)
1
How many English words does 4000-8000 Chinese characters correspond to?
1
What do Chinese write on a condolence card?
1
How to say "home improvement" in Chinese?
1
Could you help me translate this picture?