The interpretation of a sentence in the Qieyun (切韵) preface

The Qieyun is a rhyme book written by the scholar Lu Fayan 陆法言 in 601 CE, during the Sui dynasty. In my degree thesis I'm trying to analyse some aspects of this particular work.

Recently, I managed to translate the preface of the Qieyun by myself. Here you can find an online version of it. However, there are some obscure points. For the purpose of my thesis the most serious doubt I'm facing has to do with the following sentence:

Now, in the page I've just linked there is an explanation in modern Chinese of the contents of Lu Fayan's preface. If I scroll down I read that the previous sentence means:

The problem is: how should I interpret the phrase 共用一个上字来切的? The world 上字 has a specific meaning, it represents the first character used as an initial speller in a fanqie spelling. Nevertheless, as I've just said, 上字 refers to the initial consonant of a syllable or 声母, not to the rhyme or 韵母. It seems strange to me because in the previous sentences Lu Fayan was talking exactly about rhymes:

I asked my chinese friend who studied Linguistics and Historical Chinese Phonology. She looked the explanation proposed by Baidu Baike and concluded that 上字 here simply means "the character 上". According to her, the sentence means that the character 上 could be used to write the fanqie spelling of the characters 先, 仙, 尤 and 侯 in some southern dialect of the time. In other words, they all rhyme with 上 (MC dzyangH) which has the final -jangH in Baxter's notation of Middle Chinese. However, I think she deduced it only based upon the explanation of Baidu because in the original text the character 上 is not mentioned.

So, after all the above considerations, it seems to me that the foundamental question lies in the true interpretation of the phrase in the explanation. By only looking at Lu Fayan's original text I'm not able to give a meaningful translation of that sentence.

In your opinion, is my friend's view correct? If not, how should I interpret the sentence? What could an proper translantion be?

There are many errors in the 百度百科's article you gave, so I show my punctuation of the preface first. The content comes from the 水巷孑蠻's answer.

Here, 陸法言 stated the reason that he wrote this book.
1) and 2) were the story why the subject was raised. (The eight guests actually visited 陸法言's father, 陸爽.)
3) to 8) were the phenomenons they found.
9) and 10) were what they did after finding those phenomenons.
11) and 12) were the reason that 陸法言 started to write. (Because he was the youngest one among them, I think.)
13) was the reason that the book was delayed about 18 years.
14) to 16) were the situations 陸法言 faced after he was fired.
17) was the way he wrote the book.
18) and 21) were what he felt after finishing the writing.
22) was the date.

The punctuation of the sentence in question should be as follows.

This sentence has nothing to do with the previous and the next ones. Its meaning is as follows.

There are four groups here, not just two. 俱論是切 is the same as 共為一韻 in this case. They all mean that the rhyme of each pair was mixed up. The author used different expressions to avoid the repetition. This 切 means the 下字 of the 反切, i.e. the 韻母. This sentence states that the rhyme of each pair should be different in their opinions, but it was mixed up in some areas or books. 俱, 論, 是 and 切 are equivalent to 共, 為, 一 and 韻 respectively. 論為 means 被當成, that is to be treated as. 是 here means 此 or 這個, i.e. this. Since it is singular, 是 means 此一 or 這一個, which implies 同一個, the same one.

There are many errors in the 百度百科's interpretation you gave. 北京 首都师范大学 文学院 冯蒸教授 has a much better interpretation, 《切韻˙序》今譯與新注. He is an expert in this field.

Although he is a native Chinese in China, this article was still written in Traditional Chinese. It is a copyrighted article. Open 大江東去, and search 切韻序今譯與新注. 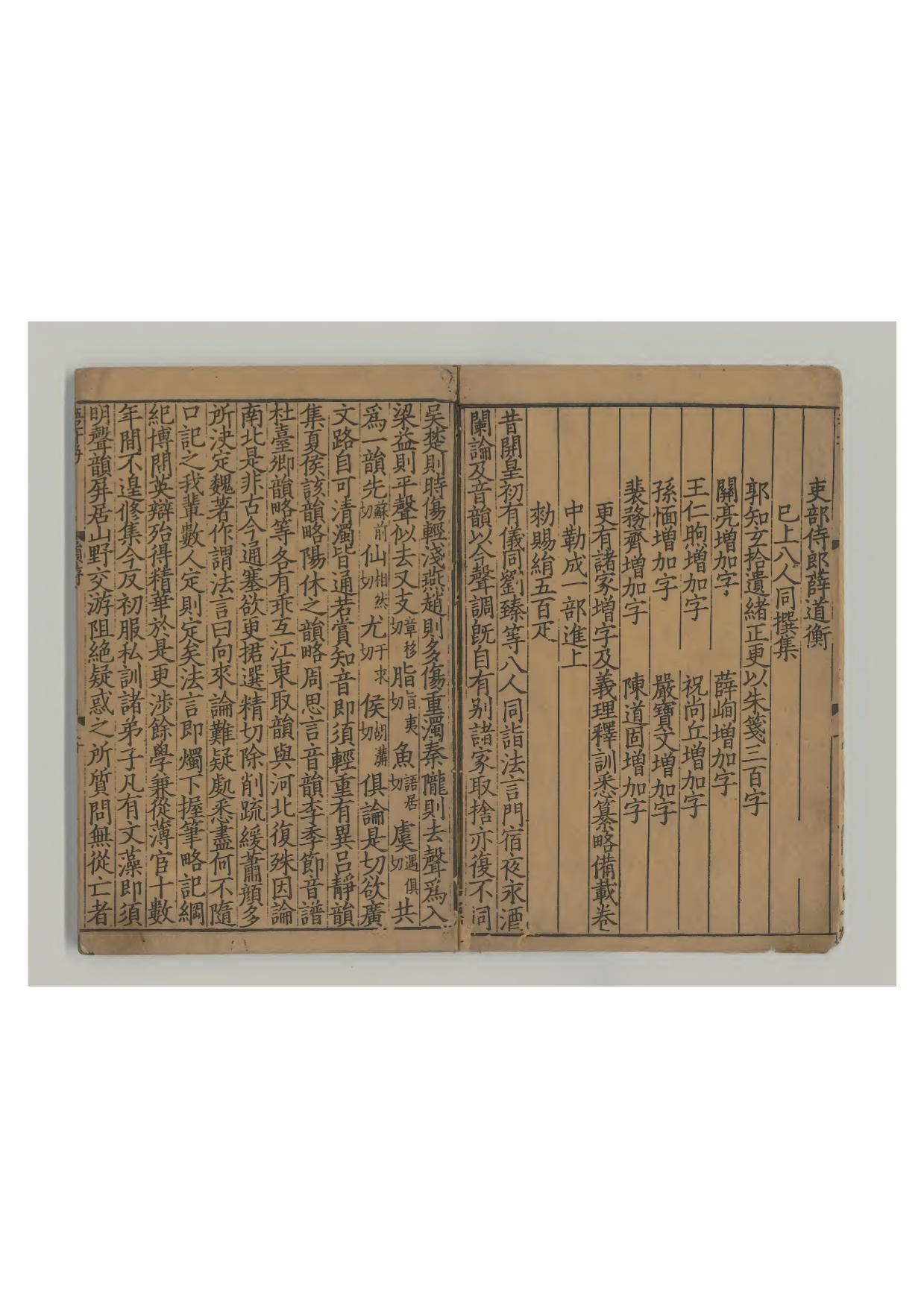 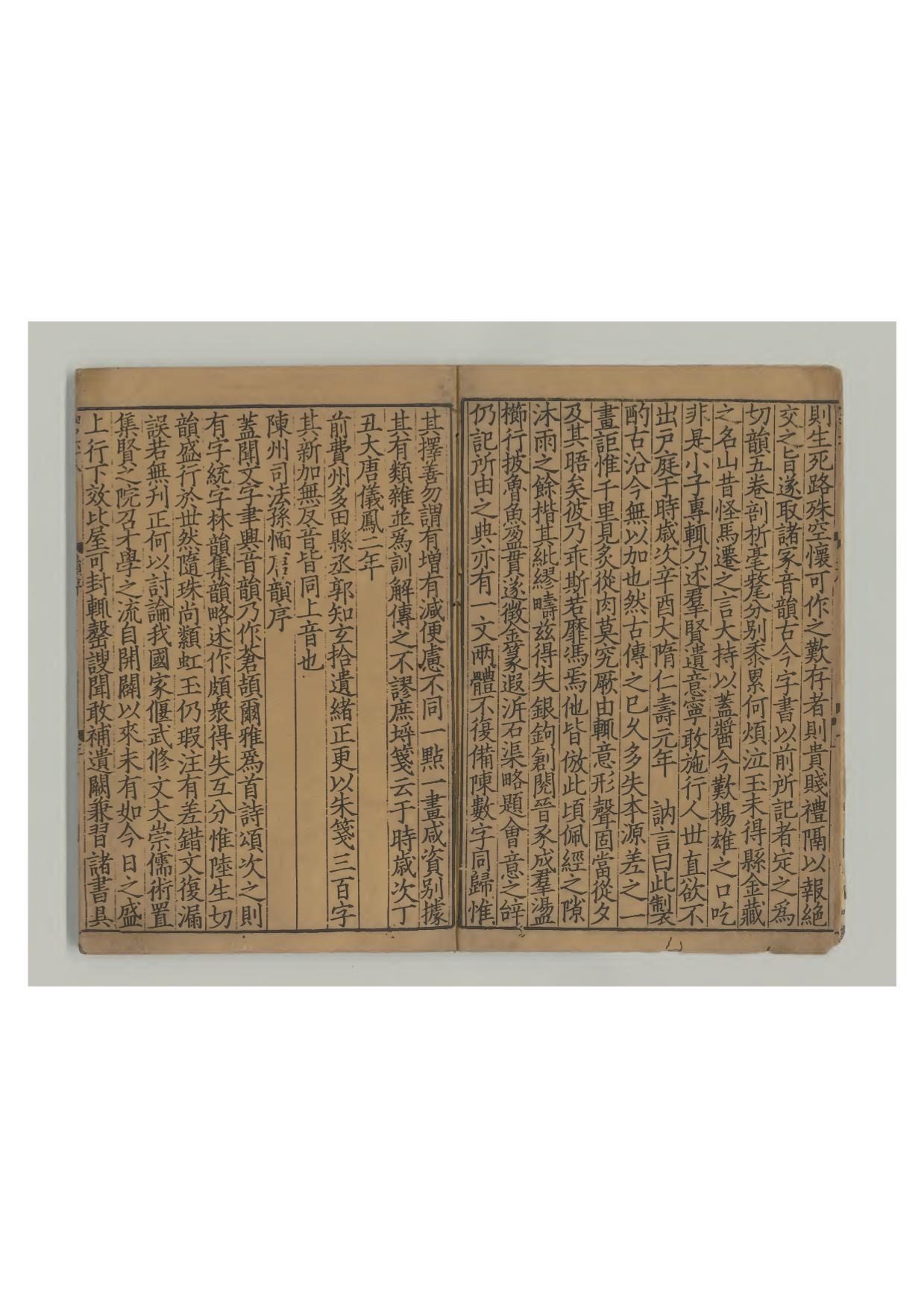 the original preface of 切韻, by 陸法言; is quoted in 鉅宋廣韻 (printed in 1169), that the national archives of japan has a downloadable copy. it's page 3 & 4 of 卷一:

imo, for your thesis, rely on this one :)

about how to interpret:

then, in the verse of "先﹒仙﹒尤﹒侯﹒俱論是切"

so, here's my interpretation: "支﹒脂﹒魚﹒虞﹒共為一韻"

btw, may i ask, do you have the full text of 切韻, in which version?

In my opinion, your female friend is totally wrong. 先（苏前反）仙（相然反）、尤（于求反）、侯（胡沟反）俱论是切 simply means, although 先,仙,尤,侯 are different 反, they are actually the same 韵，so you can 切 with them like the same thing.

Not the answer you're looking for? Browse other questions tagged translation meaning-in-context middle-chinese or ask your own question.