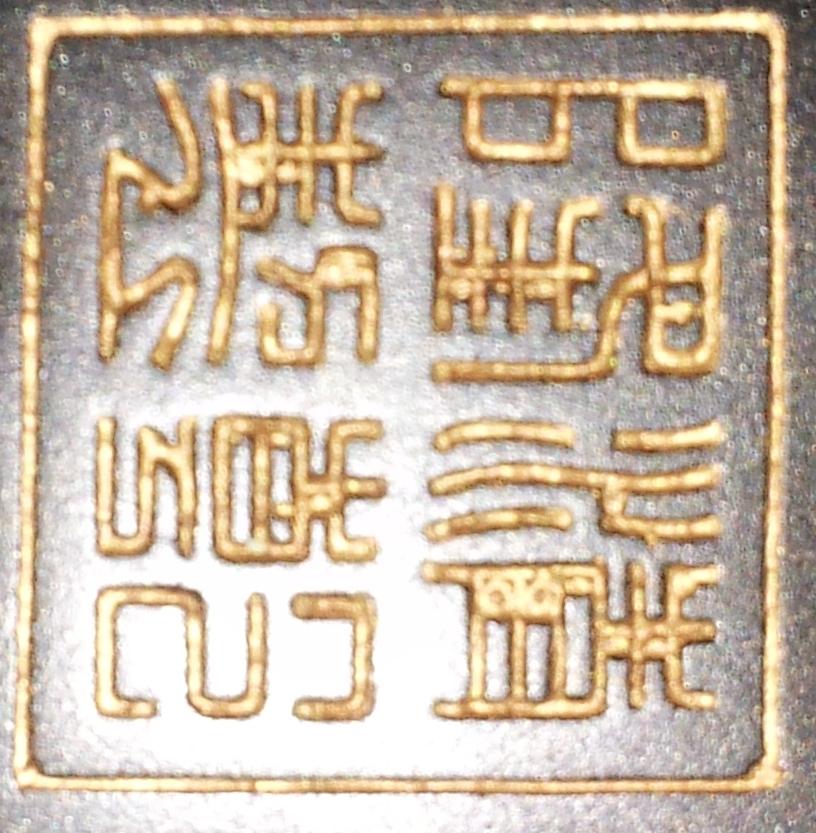 Can anyone translate the pottery mark shown below. It is on an ornate Japanese? bakelite? bowl roughly 340mm round probably 20th century. The bowl is very ornate and has bats and fruit on the inside of the bowl and flowers and foilage on the outside of the bowl. Entire bowl is gold in color except for a black base.

it is 清乾隆制,means it is made in the Chinese Qing dynasty over the Qianlong Emperor time.And in my opinion,it is fake

Rotate your pic 90 degree counter-clockwise. That's the right format of this pic. then you get

The right reading order is： BDAC 清乾隆製, declared this bowl is made in the Chinese Qing dynasty over the Qianlong Emperor time.

And it's obviously fake antique to me. Since the official saying in 4 words would be:乾隆年制, if in 6 words would be:大清乾隆年制. Nearly no one would use 清乾隆制, it's an offense saying to emperor and it's a death penalty at that time.

8
That mystical 就 again
2
Chinese equivalent of "I'm stealing that joke"
1
Translate identification mark on a Chinese bowl (Characters identified: 景德鎮製)
1
How do I say that I'm Russian?
3
"I got the feeling that..."
1
What's "that" and "which" in Chinese
2
Can someone identify these marks on the bottom of a blue porcelain bowl? (Characters identified: 中王國 賈泊氏)
0
I believe this asian artwork is from China. I am seeking the translation of this artist signature! I will include photo of signature!
1
Help w/translating (to English) a stamp on bowl please!