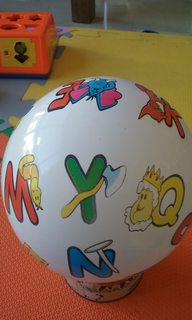 A recent attempt points to the Chinese word 鉞 (yuè) which seem to have the meaning axe. The theory is that this picture might have been used to illustrate the letter Y in a similar context for teaching pinyin.

I don't speak Chinese, but based on Google Translate, I get the impression that words starting with 斧, 斧头 (Fǔtóu), 斧 (Fǔ) and 斧子 (Fǔzi), would be more commonly used for axe. 鉞 seems to be used for axes used as weapons.

My original answer is as below:

The answer is no, we wouldn't

They are not pictures that illustrate pinyin; The pictures are there as visual aid to help children to remember English alphabet more easily.

There have to be a mistake somewhere -- Q-Queen, W-worm, N-Nail pairings make sense, but 'Y' and 'Axe' pair doesn't, because the word Axe doesn't begin with Y.

I think the original design was [X-aXe].

The point of this design was to match an alphabet with an easily remembered common word, thus help children to better remember the English alphabet; since there is no common word begin with the alphabet X, the designer made an exception and paired Axe with X, because the pronunciation of Axe is similar to X.

Although the word 'axe' doesn't begin with 'X', but 'axe' does contains 'X' and it is the prominent alphabet in the word.

The handle of the axe is supposedly the missing lower left part of the alphabet X, which should be painted green to complete the alphabet.

It was either the designer's idea, thinking people would get the idea that the missing part of X was replaced by the axe's handle. Or it was a production error that painted the axe handle with different color.

I am a retired graphic designer.

No. 鉞 is not a commonly used character, and a hard one even for adults.

No. 鉞 is not used to refer to the ax anymore nowadays. If the ax has to be on the ball, it will be paired with f.

P.S. I think the ax is put there because the Y resembles a tree and is even painted green. It probably is a coincidence that 鉞 has the pronunciation of Yue.

I really really hope you are good at chinese language so that I can explain this in chinese word which is far more better than I do this in english... first of all,you are right,it is not a 鉞 in the picture,it is an axe. this is a 鉞 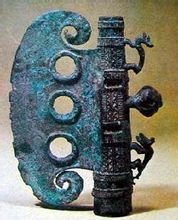 鉞 is not an common weapon which are used to fight in the war.it is a ritual object which only for showing the power and the glory of its master. in ancient age of china,there are nine rank of the mandarin.you can not kill(usually is cutting off head) a mandarin up from the second rank by a simple weapon like a sword or a knife,you must use 鉞.so it often is an ritual object belongs to the emperor.if the emperor give the power of having 鉞 to a madarin,then the madarin can kill every other madarins without asking the emperor at first.so it is the most power of a madarin can get.in our history if a madarin can have 鉞,his emperor must be very powerless or just a puppet,he will instead him to be the emperor and intial a dynasty of himself's very soon.or you can understand as it is the last step of a mandarin to instead an emperor. and emperors did not usually use 鉞 to kill mandarin if he want to kill a mandarin of second rank or upper,he would make him to be a normal person at first and kill him with a simple weapon or if the emperor is very kind and gentle,he will just hang him up or poison him,cause it can save the integrity body which is very important in chinese culture.

Not the answer you're looking for? Browse other questions tagged meaning word-choice pinyin or ask your own question.

12
Why were some letters like Q, X, C, chosen for Pinyin which confuse non-Chinese speakers?
7
What is the correct orientation of "ㄧ" in zhuyin fuhao?
4
Why so many definitions associated with each word?
0
If Pinyin (or Other Romanization) can be Translated Back into Chinese Characters
1
Asking Chinese mother-in-law to learn pinyin?
2
How common is the character 唷 (pinyin: yō) in Mandarin?
3
What is this modified version of Hanyu Pinyin called?
4
Is pinyin an accurate pronunciation guide?
2
Chinese characters on original Art (Painting and Litho on Wood) I bought in China