Both words seem to express crab in Mandarin. What is the difference between the two?

(It is so difficult to discern these words in Mandarin, where one word seems a subset of the others...)

Many individual characters are said to mean something even though they are not (or rarely) used as independent words. I think user6065 pretty much summarizes what is going on.

although 蟹 can be used by itself, it is also part of many compounds, e.g. 螃蟹 crab， 龙蟹 lobster (for more see 小马词典），螃蟹 would seem to be a more precise unmistakable term for crab

螃蟹 is preferred because it is easily identifiable as meaning "crab", whereas xiè uttered in a different context could mean many things. There is even a famous play on words on 河蟹 illustrating this.

There is a preference in Mandarin for two syllable words where potential amiguity may arise. Standard Chinese (普通话) is a relatively innovative Chinese dialect in that it has lost many distinctions found in other Chinese dialects (for instance, in Cantonese, there are many more possible consonant sounds at the end of syllables; Mandarin only allows n and ng. Additionally, Standard Chinese has less tones than many dialects (once again, c.f. Cantonese). But speakers have more strategies beyond more complicated syllables and more tones to distinguish words. Words may be made longer, for example:

In the above words, the final character 子 doesn't contribute any meaning but rather serves to differentiate these words from others with the same first syllable.

Additionally, there is a smallish class of Chinese words that were always (as far as we can tell) polysyllabic. The most well-know of these is likely 蝴蝶 "butterfly", where neither the first nor second character are meaninful on their own, but they are now both understood to mean "butterfly" by virtue of mutual association. Perhaps 螃蟹 falls under this class as well.

Looking up the words in MDBG Chinese Dictionary,you would see that the compound word 螃蟹 means crab, and so does each of 螃 and 蟹, when written individually. 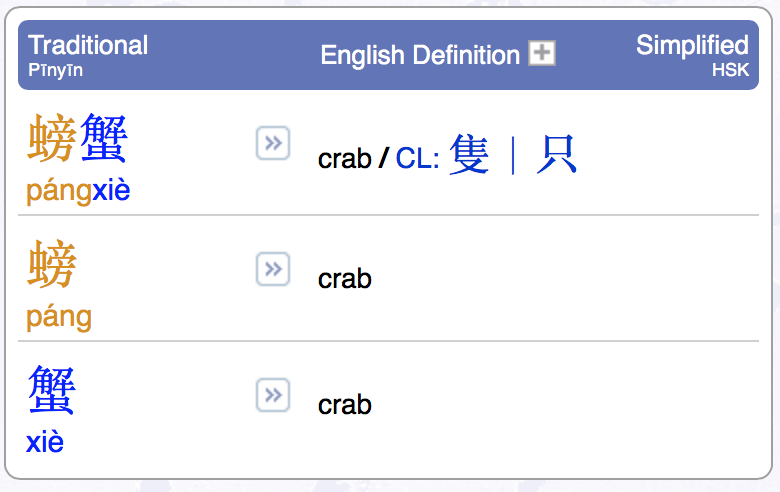 Why is it this way? Well, if you look at, say Yabla Pinyin Chart, which shows ALL of the syllable sounds Chinese has, you will see there is NOT MANY. Apparently only 416 of them. Multiplied by 5 tones, and you still have only 2080 total sounds in Chinese.

On top of that, some syllables are much more common than others. So if someone just says xiè, then it could be any number of words. The example shows just some of the words with that pronunciation.

So in spoken language, especially if the concept is not clear, using a single character word means people are not likely to understand you, ESPECIALLY if you have some sort of non-standard regional accent, which is probably still the norm rather than the exception in China.

That's why most Chinese words in spoken vocabulary have two characters, usually which each have a similar or same meaning, combined to make a clear, specific word, which can be readily distinguished. Look up Pangxie in the same dictionary, and you will see that regardless of tones, that is a unique sound combination, that gives only the single result.

Also note that in most compound words with two characters, only one of the two characters is commonly used alone. For example for crab it's usually pang, and rarely if ever xie. And that same character will usually be used in combination with other characters to form related words. Not always, but mostly. For example if we look up 蟹 we see this: 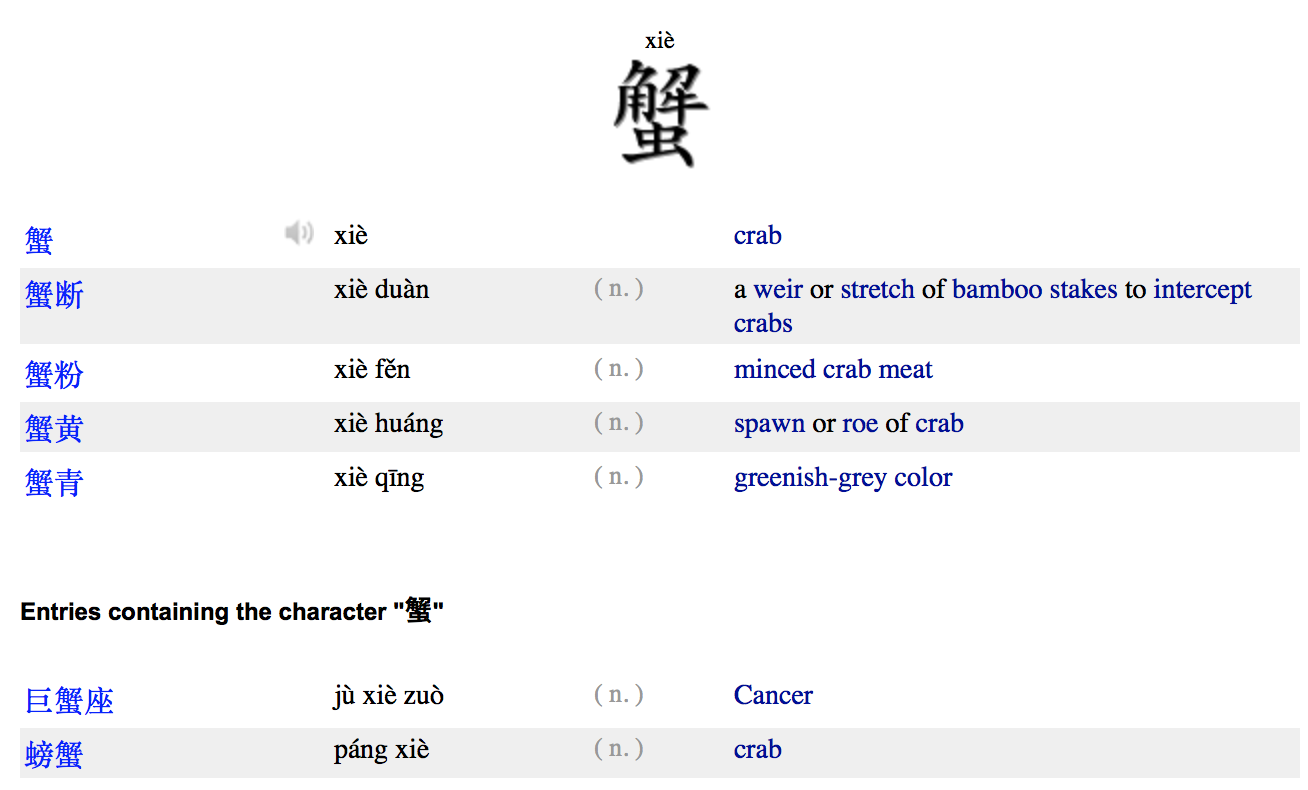 And if we look up 螃，we see less examples.