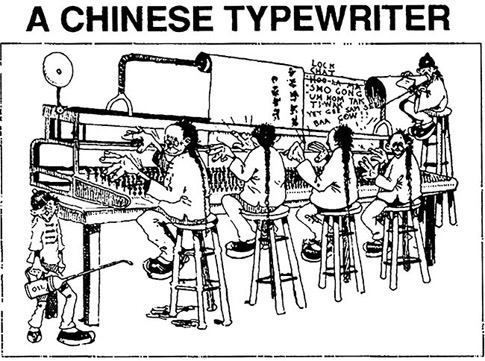 The first mass-produced Chinese typewriter was a figment of popular imagination. It was first sighted in January 1900, when the San Francisco Examiner spread word of a strange new contraption housed in the city’s Chinatown neighborhood, in the back room of a newspaper office on Dupont Street. The machine boasted a twelve-foot keyboard complete with 5,000 keys. “Two rooms knocked into one apartment afford shelter for this remarkable contrivance,” the author explained, describing a machine so large that the “typist” was something akin to a general commanding forces over a vast terrain (figure 1.1). The piece was accompanied by a cartoon in which the caricatured inventor sat atop a stool and shouted Cantonese-esque gibberish at “four muscular key-thumpers through a large tin megaphone.” Lock shat hoo-la ma sho gong um hom tak ti-wak yet gee sam see baa gow!!

My mother-tongue is Cantonese. As far as I understand, this is not anything in Cantonese (at least modern Cantonese). Although some of the words sound like Cantonese, for example “Lock shat” sounds like 落實 (lok6 sat9), I can’t think of any meaningful content when they are put together with the words after that.

It's definitely Cantonese since 'yet gee sam see baa gow' sounds exactly like 'one two three four eight nine' in Cantonese, and 'tak ti-wak' sounds like 'make a phone call'.

I don't speak Cantonese, so I cannot give more information on this.