I asked a Chinese friend if the measure word for 油条 (yóutiáo) is 条 (tiáo). They said I should use 根 (gēn), but I'm unsure why. It might be because it's plain wrong, or perhaps just that 根 is better.

Question: Are 根 and 条 both measure words for 油条?

This is 油条 being cooked: 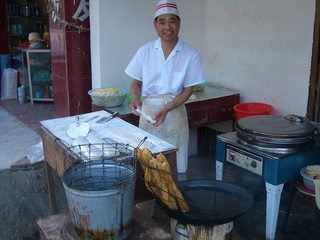 I think the main reason is that 油条 already includes the character 条, so to avoid double use, we say 一根油条.

I'd say that 根 is the most common unit word for long, straight objects, such as 一根葱 (spring onion), while 条 is used for things that may be long and wiggly, such as 一条河, 一条路, or 一条鱼.

Overall, though, your meaning wouldn't be confused. In terms of normal speech, measure words don't matter so much as long as you don't use one that's blatantly wrong. In this case 条 is pretty close to correct, so I wouldn't worry as long as you're not in an academic or formal situation.

You can say 一条, 两条 without 油条 at the end, since 一条油条 sounds like a tongue twister. You can even say 一个油条. But 跟 is still the most common counter.

Admittedly there is almost no difference based on the dictionary definition for its usage, and you'll find the same issue when applying it to other objects like cigarettes and bananas where both words are used almost interchangeably. But I might offer you some insight into another aspect that you can consider in how the words can be used.

The choice of the appropriate word, as suggested by some of the answers, depends on the context as well as the fluency of the sentence.

For example, if you wanted to purchase this item, you might actually use 買一个油条 to indicate or emphasis the quantity rather than the shape of item, which sounds better than 買一条油条 or 買一根油条.

When describing the item being consumed, 吃一条油条 might sound less fluent due to the repetition of the word, but the emphasis on the shape of the item helps you to understand how someone would eat it (because it is long and slender). You can also use 吃一根油条 but I don't hear it used as often.

Not the answer you're looking for? Browse other questions tagged food measure-word or ask your own question.