In English parts or fragments of sentences can simple be duplicated with ditto marks, here's an example from Wikipedia:

Japanese has dōnojiten iteration mark: 々 - which works similarly to "same as above" or "same as the last one": 人々, 山々, 個々.

In Chinese, 二 (usually appearing as 〻) or 々 is used in casual writing to represent a doubled character, but it is never used in formal writing or printed matter. In a tabulated table or list, vertical repetition can be represented by a ditto mark (〃).

Iteration marks have been occasionally used for more than two thousand years in China. The bronze script from the Zhou Dynasty, shown right, ends with “子二孫二寶用”, where the small 二 (“two”) is used as iteration marks in the phrase “子子孫孫寶用” ("descendants to use and to treasure"). 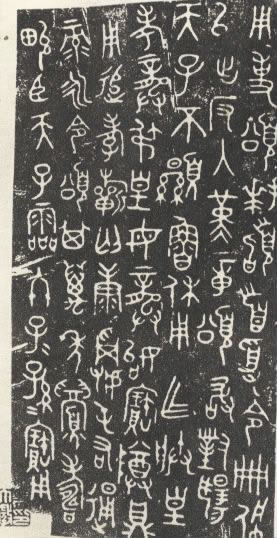 Here I have something that seems more like 上 than 二 though:

Wikisource has written it as:

So presumably this mini-上 looking character is also an iteration mark but Wikipedia only talks about 二、〻、or 々.

According to this kknews article (找薦004.疊字符/重字符這麼用，有沒有錯？), many variants were used for the iteration marks, including marks that were or looked like the following:

It goes on to state that what looks like「匕」is normally thought of as a result of rapid writing leading to graphical corruption, or degradation of the engraving medium (for steles). We know that「々」came from a variant of「同」, but the origin of「=」is conjecture without any hard evidence. It may be later surmised as「上」or「二」, but it is probably impossible to ever know.

BTW, if you search your copy of 躋春臺, it will have more examples of「匕」as the iteration mark.

Don't let the written characters fool you!
The character which works as iteration mark is definitely not a 上(lit. "up"). Rather, it looks like Chinese character 二(lit. "two") with a small vertical stroke on the left. The vertical stroke could be some redundant stroke which is unintentionally produced by the author, or a small piece of anomaly which could occur during scanning.

[Everyone is trying to warn me off of 上 but sometimes the heart just wants what it wants.]

is saying that this slightly unconventional number two:

is a variant of:

It's 研订说明 goes on to say:

Under their 形体资料表 they also have a document entitled 金石文字辨異:

If 上 and 二 were somewhat interchangeable it wouldn't be surprising if 上 was also used as an iteration mark like 二.

2
Can I always write the 艹 (grass radical) with three lines only?
0
If Chinese characters are ever used like numbers like in English
6
Are there text-based online roleplaying games which can be used for practicing Chinese writing?
3
Can 地 be used in place of 的 as a stylistic choice?
1
在 ... 之余 : It looks like there is a grammar point using 之 in that construction (found on archchinese). Who can explain that point?