What do these two characters on cufflinks signify? (Characters identified: 福 and 壽/夀)

I was given a pair of gold cufflinks by my grandfather who was in Shanghai 100 years ago. Each shows a Chinese character (Mandarin, I guess) and I would like to know what these mean. However I have searched with possible English words (left/right, prosperity/health, sun/moon, man/woman, east/west etc) and not seen anything similar in either simplified or traditional. I have tried via OCR (baidu.com and others) with no meaningful results (mostly none at all) even when rotated.

I appreciate that this site is not a free translation service but have asked on meta and understand that a concession may be allowed where reasonable effort has been made to obtain a translation independently. In addition to trying to guess the translation and working backwards, I have tried:

Just like with English Google OCR disappoints and is clumsy to use. It seems to be some kind of black magic if or if not the OCR conversion is triggered.

A scan of the cufflinks is shown and the sketches I took in the hope they might aid identification and hence translation: 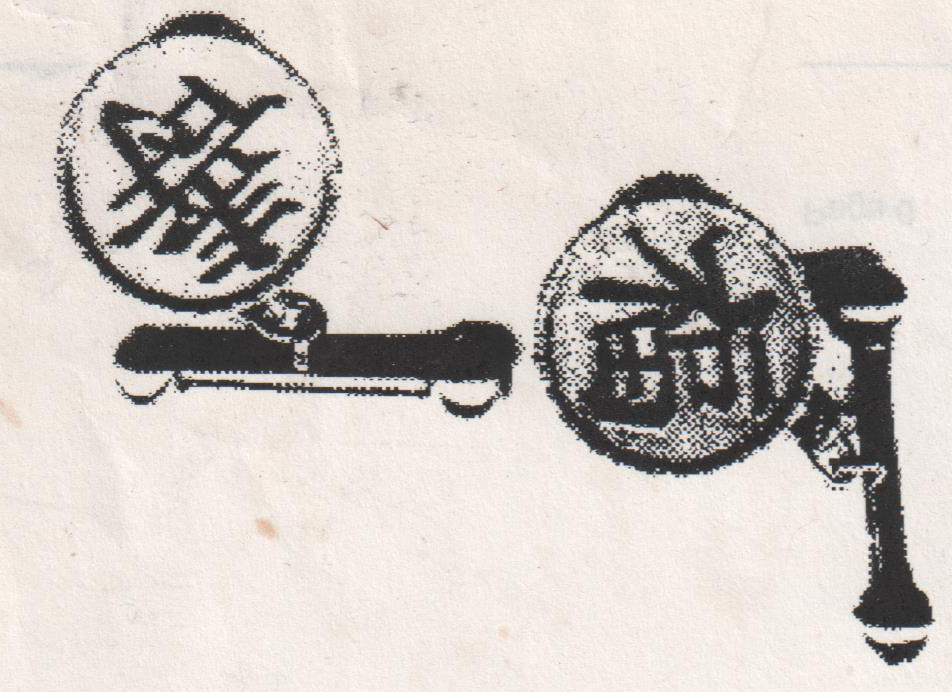 Please note that I would be very grateful for any of the following:

So something other than translation would be very acceptable. I just don’t fancy wading through what I believe are some ~5,000 symbols trying to find matches!

about the technique, well, i learn traditional chinese since childhood, there's no difficulty in recognising it.

your sketch is correct, to show which way is up.

A technique for ‘solving’ such a problem without a human translator

I pretend I did not know Chinese, I use 'Chinese hand writing input' on my iPad to mimic the brush strokes in the image you posted with my finger movement. I got a list of suggestions, Use your judgement to see which one is closest to the original image. Among all the suggestions, '壽' and '福' are the closest.

Advice of which way is ‘up’

familiarize yourself with Radi­cal https://www.yellowbridge.com/chinese/radicals.php you can tell which side is up generally.

The name of the language

Copy and paste whatever words into Google Translate and click 'detect language' button. It will tell you what language the words are in.

Whether Simplified or Traditional

Finally, check online dictionary to learn the meaning of the character

@水巷孑蠻 has already provided the correct answer - I just want to provide some additional methods for getting the answer.

I took your written characters and put them into Pleco's OCR software: 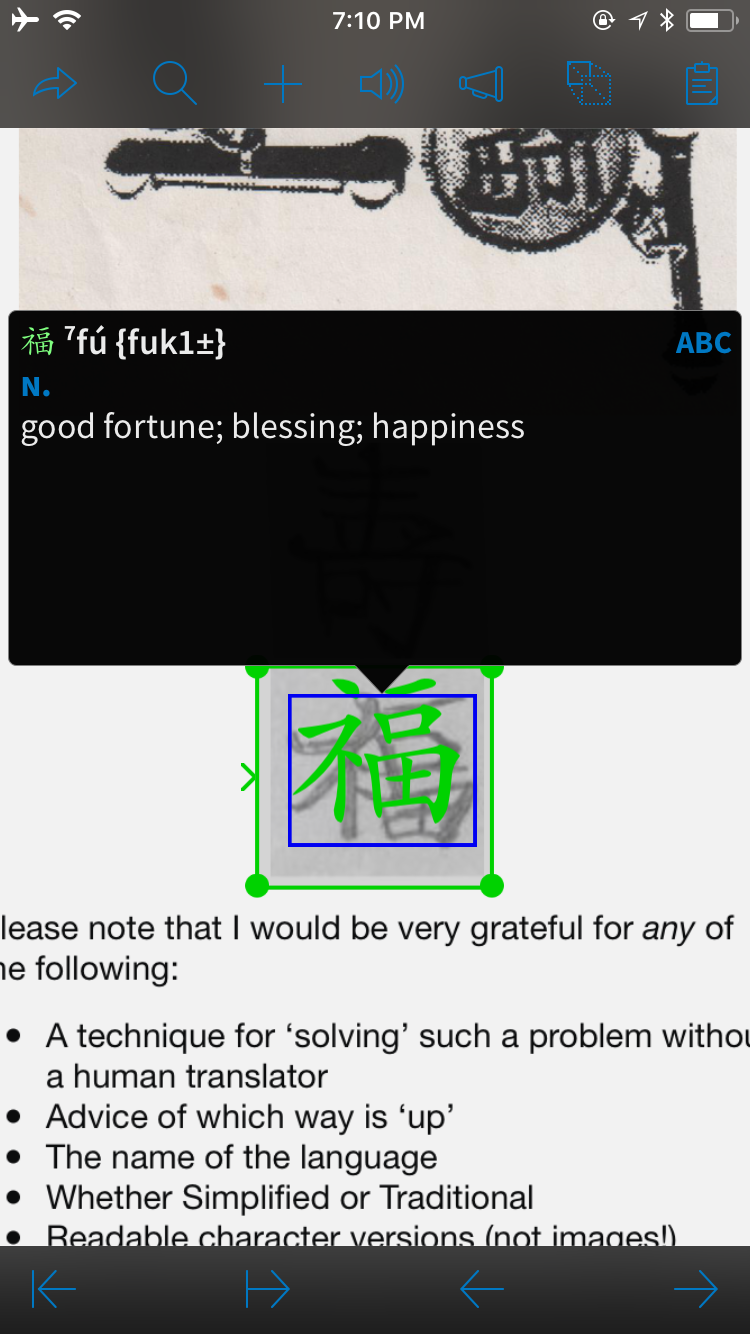 Your 福 was recognized almost straight away and you can see the definition above.

Your 壽 was recognized as 毒, originally, but the OCR software has an option where you can press & hold and finger draw over the character - helping the software to detect the actual character.

Here are the results: 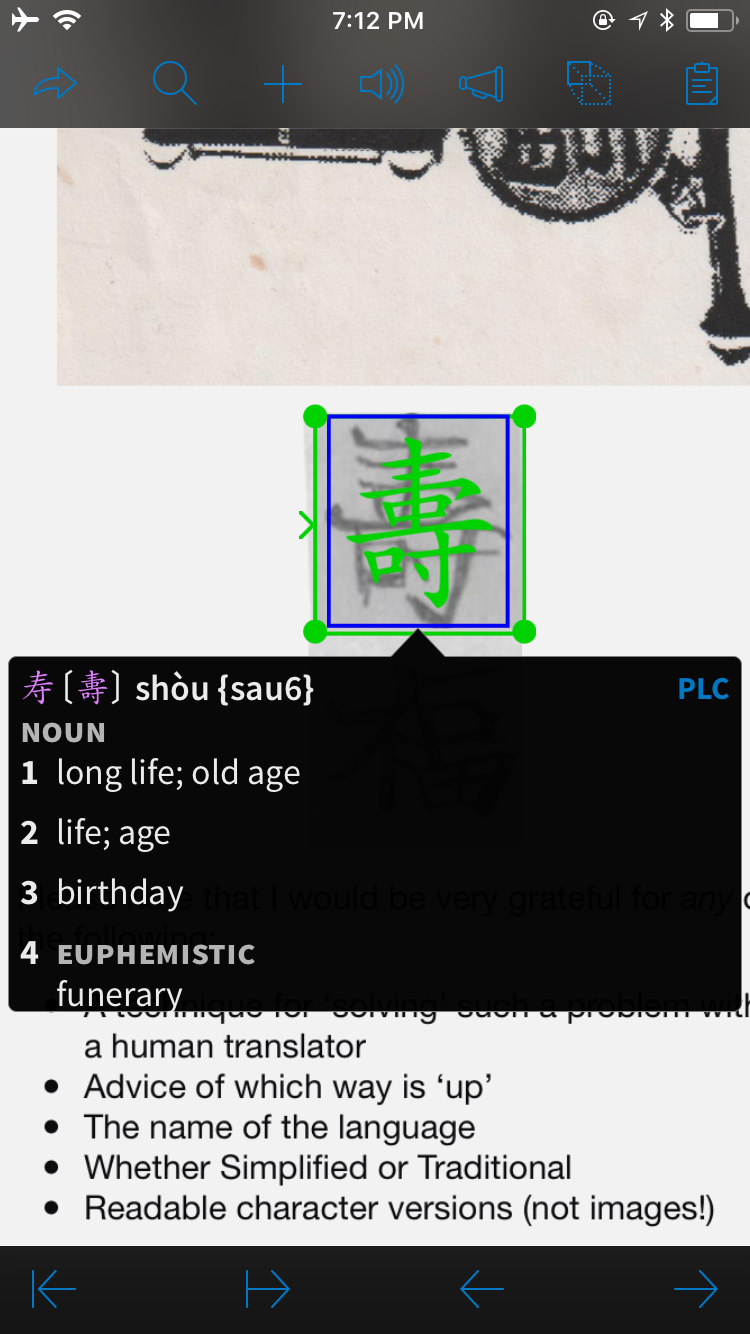 Not the answer you're looking for? Browse other questions tagged translation mandarin character-identification or ask your own question.

1
How to say "One of these" and three other mini phrases?
2
Chinese writings on this movie plane
1
Correct translation of "I need some help with my homework."
1
Translate the characters in this sign
0
How to separate the words in the phrase 博格瑞牌法兰希小金文奶酪 & match it to the word translation in english
2
What is the meaning of 絕 in 天不絕人?
0
What are the characters in this seal? (Characters identified: 白云長滿目)
1
I am trying to identify the seal on a vase, Any help gratefully received (Characters identified: 南宋官窑)