What does the Mars symbol (♂) mean in Chinese (subtitles)?

I keep seeing this - probably in some B站 (BiliBili) type of videos: 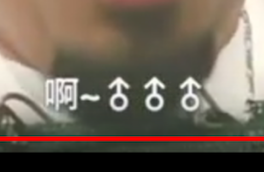 although the orientation is a bit off.

This clearly is not a Chinese character - but what is it doing here?

What does the Mars symbol (♂) mean in Chinese (subtitles)?

The story probably starts with GV actor Billy Herrington's video being uploaded onto a video sharing websites in China (probably B站 or A站). In the video there are a lot of wrestling scenes for some reason and the 弹幕 will say “摔♂跤” with a mars(male) symbol in it to indicate the homosexual element in a funny way, because people generally don't really understand why wrestling scenes would be present in such videos and people start to wonder "what exactly are they doing." They go ahead and push that thought to a philosophical level and start considering that as funny, not comprehensible and humorous.

And then it kinda goes beyond that scope, and anything that can be remotely related to that sense, you can insert ♂ in it to indicate that humorous effect.

♂ is a 'male' symbol. The one in the subtitles had the arrow pointing up may just be a variant