Why are certain Chinese surnames common in certain provinces?

I am referring to the figure below, obtained from Wikipedia 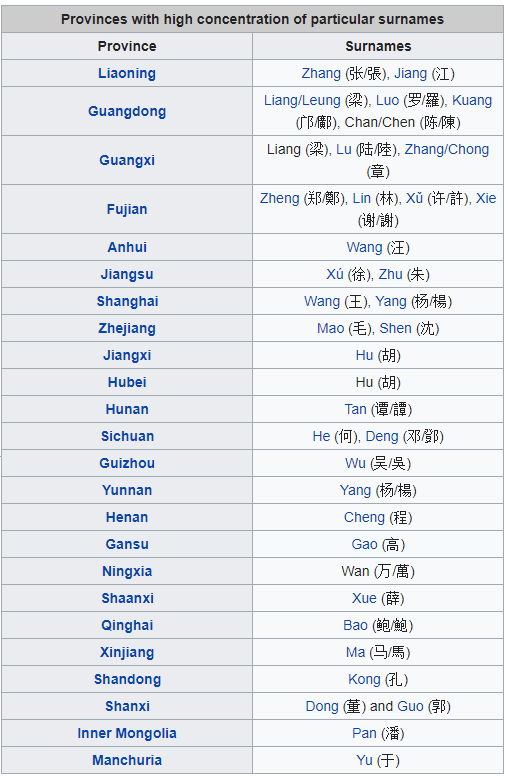 I am aware that about 40% of all Chinese can be characterised into 10 or so surnames. However, breaking it down, there are particular surnames that are common in certain provinces.

I was wondering if anyone knows the history behind this geographic distribution?

I know that certain surnames, such as 陳 were named after their vassal states of China (pre warring state). But obviously, the geography has changed significantly since then.

Are there any other reasons for the high concentration below?

If you are particularly interested in the historical distribution of the surnames, then you can view maps from the Chinese Biographical Database (CBDB). http://amap.zju.edu.cn/maps/?limit=20&offset=0&category__identifier__in=humanityhistory&title__icontains=CBDB You can compare them with some of the following modern-day distribution maps: https://www.zhihu.com/question/34378366/answer/169547237.

You might also notice that some surnames are confined to certain territories, which are based on the topography of the landscape. For instance, geographic regions are isolated by mountains, which are conducive to the development of surnames in an area. The explanation is crucial: In regions that are relatively closed off by geographic barriers, internal migration is reduced. As a result, the surname geography has not altered significantly through the course of history.

Referring to the figure proposed in the question, notice that Heilongjiang province's population is not concentrated in relatively uncommon surnames. Heilongjiang is relatively closed-off, with a geographic migration coverage limited mainly to the Shandong and north-eastern provinces. In this way, provinces where immigration (internally, within China) is frequent, such as Fujian, Guangdong, Jiangsu and Zhejiang, have a range of surnames concentrated in that province. These surnames occupied a high state of regional power, resulting in a cumulative increase in populations over the Song and Ming dynasties.

Hopefully, you are still online, and I have provided the necessary insight to answer your question.

Disclosure: The figure above is not entirely accurate, it seems to make some sweeping generalisations. Jiang is a rarer surname in Liaoning province, compared to Yu, which is distributed not only in Manchuria, but also Shandong. Yang is not so concentrated in Shanghai, but rather, it is balanced between provinces north of Shanghai and south of Shanghai. Gao is not a very typical surname of Gansu, Wei or An would be a more appropriate representative. Cheng is to some extent, concentrated in Henan, but not so much, because most of its population originates in East Hubei province with internal migration.

When the Chinese children grow up, usually they don't leave their hometown. And there is an old saying "父母在，不远游". It's just our culture.

The migration history of all the major Chinese surnames is really out of the scope of an SE answer. You can read 百度百科 for each surname if you are really interested. For instance, https://baike.baidu.com/item/张姓/616988. (百度百科 is more detailed than Wikipedia on such topics.)

On the other hand, isn't "certain surnames common in certain provinces?" very natural? You can't expect all surnames to be evenly distributed in all the provinces, can you? I'm sure other countries also have this "certain usernames are more common in certain areas" thing.

The concentration of surnames in certain areas in China is the result of "in-breeding", that phenomenon had stretched hundreds or even thousands of years.

In the ancient past, the Chinese were clustered in small villages. Due to lacking means for transportation, the villages tended to be isolated from the outside world, to which the villagers had poor knowledge about but suspicious and distrust.

The village usually started quite small, maybe a few families totaling a few hundred people. The men tended to stay in the village either for inheriting the establishment of their ancestors or to maintain the line of work that had carried through generation to generation. They usually marrying the neighboring woman, who lived in the same village, and the elders of the two families tended to be close friends.

Similarly, the women were tended to stay in the village forever, as the parents were worried about their daughter might be mistreated, and hopelessly abused. It was a prevalent practice that the rich family will find a poor young fellow in the village to marrying into the bride family with the condition that their child ought to be using the bride's family's surname. For young women from poor families, they often became the collection (second wives) of the local rich old men.

As the phenomenon continued for centuries, there was enormous population growth but the number of the families remained constant, so did the family names (surname). And as the family roots got stronger and deeper, people tended to be homebound rather than leaving, thus the clustering of a few family names around an area was quite common until WWII, and later the Cultural Revolution triggered by Mao, the bond was then broken.

Finally, it is worth noting that many poor families were sold to the rich family as servants, and for the convenience of remembering everybody, the host family would usually assign a new name to their servants, as well as giving them the host surname. It was for the bragging right of the host, and to distinguish to whom the servants belonged. inter-marriage between servants was commonplace, and their child would marry another servant's child and give birth to more children... the most notable thing is, after all, they all have the same family name (surname).

Hope this makes sense to you.

3
Why is George 乔治 in Chinese?
3
Where can I find a list of existing Chinese surnames?
3
Why do Chinese writers have three different names?
0
Why can a Chinese person have a nickname as 啊+surname?
1
Why do Malaysians have Cantonese surnames?
3
What are the original Chinese characters for the Filipino-Chinese family name Suico?
8
Why is Cristiano Ronaldo known as “C罗” in Chinese?
0
What are the surnames and given names of these fictional people of the Three Kingdoms?
3
What are the original Chinese characters for the Chinese family name Suening in the Philippines?
3
How common are the following Chinese names: 王朋 & 李友 & 高文中 & 白英愛? My Chinese coursebooks are full of them!