Has MS DOS ever been used in a Chinese-speaking country?

So my question is, were these kind of computers used or did they have their own line of computers, or just another operating system which displayed everything in a graphical way?

Before Windows 95, we used "倚天中文卡" to input, handle and display traditional Chinese in Dos environment. 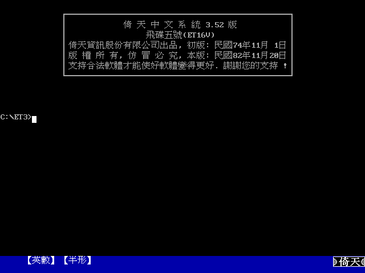 There was also another Chinese system called 國喬 (KC60), which is similar to the 倚天 system mentioned in another answer.

It is not a native system that comes up when you boot up the computer. After you boot up with the English DOS system, you will have to run the command to start the ET3 or KC60 system just like running other applications.

After you start it, there will be an extra status bar (task bar?) at the bottom of the screen that shows that you are now in the Chinese system You can then change to different Chinese input methods like Changjie （倉頡）, Dayi （大易）etc by pressing Ctrl+Shift and type in Chinese.

Not the answer you're looking for? Browse other questions tagged software or ask your own question.