Why do both 太 (too) and 过于 (excessively) occur in 外国人有时候太过于开放 (foreigners are sometimes too excessively open)?

A Mandarin Corner YouTube video describes "3 Things Chinese Like about Foreigners". One sentence from this dialogue is the following: 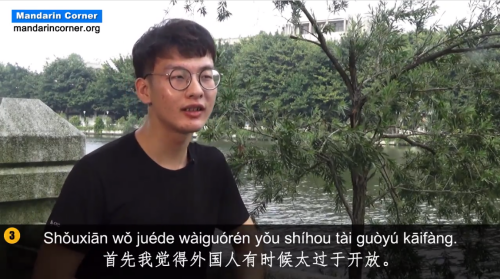 Which I translate (directly) to:

First, I feel foreigners are sometimes too excessively open.

What's confusing me is the use of both:

Question: Why do both 太 and 过于 occur in this sentence?

I'm going to convert my comments into an answer to offer another POV to the already given answer.

太过于 is a set phrase.

and KEY French defines it:

Perhaps this is similar to English usage of too + overly. It's a phrase we often use in English too. A quick google search gives me results like: too overly complex, too overly dependent and too overly ambitious - seems to be about the same logic.

ICIBA also defines it as:

Examples of usage (emphasis is my own):

太开放 probably means they are too open that you can't take it personally.

过于开放 means they are so open that in some aspect, it may be bad for themselves. The people who are supposedly open may or may not care, but it changes many things that breaks the usually logic of the implied aspect, or assumed common sense, that the opinion of the person who say that about what would usually work may fail in this case.

The 3 terms are more different in the case about prices. One may consider something unaffordable but still want to buy it, where you can't say 过高, and consider something else cheap but still not as useful as how it costs, where it probably invite some discussions if you say 太高. Still, in many cases one can be implied from another, unless the context says otherwise.

In the cases about something like openness, it's not unusual for someone to mix them up completely. 太过于开放 surely does NOT mean "it might be not that bad, but it is at least not for me". Actually, "it is too bad", but without watching the video it's not sure whether "I can't take it, fix it, ignore it or have a workaround" is implied, or whether he even notice this distinction.

This usage is conversational, you wouldn't see it in writing. Unless, of course, the writing is trying for a conversational tone. Presumably the speaker started with "太..." but felt that wasn't strong enough and added the 过于.

Grammatically, there's the difference that 太 is (just) an adverb and 过于 is more like a verb. To represent the sentence in English, you could write something like:

I'd like to note that 过于 can't normally be translated as "overdoing", it's just the closest verb in English. The reason I say it's verb-like is because 过 is a verb, and the structure works out like this:

This structure is inherited from an older stage of Chinese grammar.

Instead of just pick one adverb, that guy mixed the two together

首先我觉外国人过于开放 and 首先我觉外国人太过开放 express the same meaning for the sentence. No need to write "太过于"

Not the answer you're looking for? Browse other questions tagged grammar word-choice usage or ask your own question.

8
"I will," "I can," "I will (probably)" A fundamental problem with 會
0
Why are measure words sometimes omitted?
6
Why does Chinese sometimes put 儿 after verbs and nouns?
3
Are both 回了 and 回来了 correct responses to 你回天津了吗 (have you returned to Tianjin)?
1
What's the difference between 开放 (kāi fàng) and 开门 (kāi mén) which both mean "open"?
1
What does 勾过来 (gōu guòlái) mean in 你就直接勾过来，我觉得欠妥?
1
Why is 做 in the sentence 不知道大家觉得做女人最大的悲哀是什么？
3
Meaning of 的 and 之 when both are used in the same sentence
0
Why is there both 另外 and 别 in the sentence 你还是另外找别人吧, and why does 另外 come before 找?
1
Why is 很多 sometimes before the noun and sometimes after the noun?