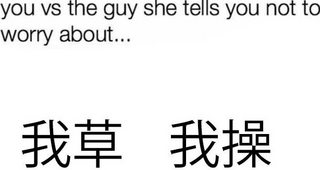 you vs the guy she tells you not to worry about...
我草 我操
wǒ cǎo wǒ cāo

I get the impression that this is rude, but anyway...

Question: Why is this funny?

Looking at some sources:

So I guess 我草 means "I want you" (in a kind of reassuring way) whereas 我操 means "I fuck" (the guy you're not meant to worry about). I don't feel too confident with this translation.

I believe the difference is that:

So, the you in this scenario is going to be left upset.

Meaning that the guy she tells you not to worry about is going to get some action.

Cao4 is in verbal Chinese only. I don't think there is an official character for it. The most likely right spelling for cao4 is 肏.

However this character is extremely uncommon in modern Chinese. Not even most Chinese people know this character, so people just use 草，操，曹 as the character for the word cao4 (only in wo3 cao4). All of these characters, regardless of their original pronunciation, should be pronounced as cao4 in the phrase wo3 cao4.

Probably a really late comment but none of the above answers truly explained the joke. 我草 literally means 头上长草 (got grass growing on one’s head), an expression used in China to say one is betrayed by one’s partner. So, to say the joke in one sentence, one fk(我操)and one got ‘grassed’(我草), that’s fked.(wo cao)

They're all slangs coming from the Internet, original characters are "我肏", a swear word that means "I fuck" or "FUCK!".

But typing this 肏 character into a computer is somehow difficult and lots of people don't even know this character(they know how to say it, but not how to write it). So people now tend to use (almost) homophones like 操 or 草(or even more weirdly simplified 艹 or 艸).

Firstly, I don't think it's common to ban 肏. But saying "肏" is like saying "fuck" and add a note that "fuck" originally means to have sex intercourse with someone, while the person who swears usually isn't thinking about this at all. Basically every non-trival modification to the common usages without an obvious reason implies you are more likely thinking about its original meaning, and is likely more offensive. And 肏 is especially strong as it could be considered closer to the original. 操 is more likely to be banned as it is more common.

And I don't think people don't recognize it. Teenagers could easily discover such characters, and find them funny at first, while someone on the Internet wants everything to be perfect and right and pretend that this don't normally happen. It's really the human instinct to want to know how to write such a common word.

So, technically, 肏/草/操 all mean the same. And the closest equivalents are all "fuck" instead of something like "f***". 草 makes me think of some rude gamers who didn't want to talk friendly and just want to be rude, and appears either uneducated or too lazy to choose a character. (That's 10 years ago and I don't know how it is like now. It was common for some small online games to sell virtual goods to broadcast a message to everyone online.) Basically it was the norm of certain groups of especially rude people.

Without context, I can't know what is supposed to be funny. Occasionally people think it funny to pretend to be rude, whether they are pretending to be in the ruder or more normal group. But others can choose to agree or disagree. And it's almost always more offensive if someone wants to be creative in using swear words. But it's clearly not so creative if someone thinks it is useful to explain the obvious or compare with something. Neither is definite just from the word choice. I think it's possible that the funny part is misattributed.

Well, tried to interpret it in another way, maybe it is about the feeling that is supposedly common for those rude gamers, compared to the feeling that someone got something bad randomly, if it's from a meme image and "you" are supposedly "her" boyfriend or something. (This explains it all. But if it actually is, you really should be careful and say the people involved are not real people when you are asking the next question about swear words.)

Since both 草 and 操 rhyme with cao4 (f..k) and they are easier to be typed out through pinyin input, they are often used as the slang characters in the internet language to replace the original cao4 character. It means the same as f word in English. 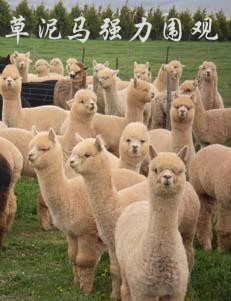 草sounds the same as 操. Some Chinese think 操 is too straight and vulgar so they use 草 as a substitutes.

It originally expresses the feeling of anger when something bad and unexpected happened. As "操" is a cursing word (fuck), it is used to express anger. You can literally understand it as "I am very angry (so I want to fuck sth...)"

As it is used more often on the internet, its meaning has slightly changed. Depending on the situation. It can expresses the feeling of astonishment and a little bit of frustration when something unimaginable happened (usually bad). It's meaning is similar to "I am Fucked" or "I am screwed" or "Oh my god". It is often written as "卧槽" (same pronunciation) by netizens to amuse others, like a comedian who pretends to be silly/naive/unfortunate to the extent of adorable in order to amuse the spectators. That's why it might be funny.

If you want to be funny, use "卧槽" instead of "我操" or "我草" as the more substituted characters there are, the less it is considered to express anger and rudeness.

It does not mean "I want you" 🤣(No offense, I am Chinese, I just felt amused, your understanding is so cute)

This meme is funny because it can be interpreted as "I fancy" vs "I fuck".

Though "我草" can also be seen as a different level of euphemism for "I fuck".

"我草" is less used nowadays. It's an outdated mild version of "fuck", like "frick" or "freak".

"我操" is very direct and straightforward so it sounds more serious or angrier. It's basically “FUCK YOU”.

The more common euphemism on Chinese social media is “卧槽”(more for shocking) and "我艹"(f*ck). Also "我艹屮艸芔茻"（free combination of any of these）.

11
Why does the word 萌 mean "cute"?
9
Why does 三八 mean gossip?
1
Is this funny way of saying things some dialect?
3
Why does 赤道 mean Equator?
5
Why is 坑爹 such a popular word, and what exactly does it mean?
0
我的个娘？ Does this really just mean 'my mother!' and why?
1
Why is “Jung” translated 荣格?
5
如何把名词形式的 'Nothing' 翻译成中文 How to translate the English noun form of Nothing into Chinese?
4
Why does "I go" also mean damn it? (我去)
8
Why say 少说两句 to break up a fight?