From a MandarinCorner.org video I Hate Getting My Period (audio and transcript link; video is also searchable on YouTube), we have the following sentence: 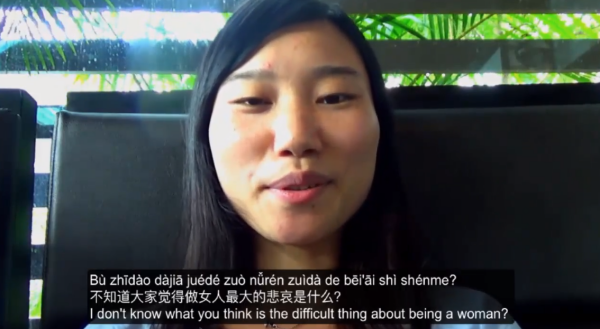 I'm confused as to why 做 is in this sentence; it seems to serve some kind of grammatical function I'm not aware of. It looks like it could be omitted without problem. I also feel a bit of a mismatch between both 做 and 是 in the sentence.

to do; to make; to produce; to write; to compose; to act as; to engage in; to hold (a party); to be; to become; to function (in some capacity); to serve as; to be used for; to form (a bond or relationship); to pretend; to feign; to act a part; to put on appearance

Among many definitions, there's "to be", "to act as", and "to produce" on the list, which seem closest in meaning. The 做 in the given sentence functions something like "is" (approximately "is the greatest annoyance"), which is typically performed by 是 (and this also occurs in the sentence). However, we obviously can't just interchange 是 and 做 throughout Chinese.

I'm more familiar with using 做 to form a verb (e.g. 做饭 "cook food" and 做工业 "do homework") rather than in this case 做悲哀 which seems along the lines of "give rise to annoyance".

做 here is a verb, according to Oxford, meaning:

they give three examples:

做个好孩子 be a good child

做老实人 be an honest person

做演员 zuò yǎnyuán become an actor or actress; go on the stage

做女人 means, as the subtitles correctly translated above, to be a woman.

做女人 means being a woman.

是什麼 means is what (what is).

You don't have to look at those 2 things together!

And if you omit the 做 in the sentence:

I don't know (I wonder) what everybody think the biggest sorrow of a woman is?

As opposed to the original meaning

I don't know (I wonder) what everybody think the biggest sorrow of being a woman is?

Can you see the subtle difference!?

Not the answer you're looking for? Browse other questions tagged grammar word-choice meaning-in-context or ask your own question.