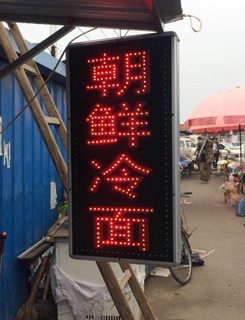 Question: Are 朝鲜冷面 from Korea (North and South) or only North Korea?

朝鮮冷麪 is just Korean cold noodles, not specifically from North or South Korea.

The confusion arises because 朝鮮 may be either translated as

For anything to do with traditional culture/art/food etc., it is improbable that 朝鮮 means North Korea, although only context can make you certain of what it really refers to. Since cold noodles is a traditional food eaten throughout the whole of the Korean peninsula, 朝鮮冷麪 should be taken as (traditional) Korean cold noodles.

For disambiguation purposes, one may call North Korea as 北朝鮮 or 北韓 instead. Compare South Korea, which may be unambiguously called either 南韓 or 韓國; note that it is exceedingly rare to refer to South Korea with the name 朝鮮.

If one wants to unambiguously refer to Traditional Korea, one may use the archaic word 高麗 instead, which is where the English name Korea comes from.

It's hard to get the origin of 朝鲜冷面. here is the reference from Baidu.

For most of natives from mainland, it's just the way/recipe (how 冷面 is cooked) that is developed by 朝鲜族 inside or outside(North/South Korea) of Mainland China. It's very popular in northeast China, since most of 朝鲜族 are located there and plus it's close to North Korea.

Nowadays, when we say 朝鲜 or 北朝鲜 within mainland， it refers to North Korea. South Korea is 韩国 or 南朝鲜. If we take it as a whole, we will say 整个朝鲜（半岛） the whole Korean Peninsula.

The Korea Peninsula used to be called 高丽. The name of 朝鲜 is granted by 朱元璋, the first emperor of the 明 dynasty. However, in the name of the ethno-lingual group residing on The Peninsula, the 韩 people, the character was rather like randomly selected to represent the pronunciation in their native language.

In the period of Japanese colonization and after, especially after Japan’s surrender in 1945 and the Korean civil war which involved People’s Voluntary Army (of China) and American troops (under the flag of UN), the rise of Korean nationalism in the south sought to lessen the influences from both Japan and China, and chose 大韩民国 (Republic of Korea) as the name of their state, whereas the Labor Party in the north sought to inherit the old Korea Empire and to stay close with “communist” comrades, namely PRC and USSR, selected 朝鲜民主主义人民共和国 (Democratic People’s Republic of Korea) instead. Note that the English word “Korea” comes from “高丽”, so actually DPRK should be DPRC (Democratic People’s Republic of Chosen).

Probably due to the Cold War, PRC used the name “朝鲜族” to refer to the Korean immigrants who came from The Peninsula during the Japanese colonization in The Peninsula and Manchuria.

Bearing these in mind, you should understand that “朝鲜” doesn’t refer to DPRK only; it is the name of the country of The Peninsula for centuries; the division has been there for decades but unity shall be restored and independence shall be earned.

Not the answer you're looking for? Browse other questions tagged meaning-in-context food or ask your own question.