Meaning of seal and engraved characters on teapot

I came across an old teapot with inscriptions, but since I don’t speak Chinese, I have no means to know what is written on it.

There are two columns of five characters (four columns with twenty characters in total) on each side of the pot, and there is a seal on the bottom.

Could you please help me translate the inscriptions?

For the seal identification portion, as mentioned elsewhere, the characters are 汪寅仙製 (meaning made by 汪寅仙, a very famous Chinese ceramics artist who passed away earlier this year; whether it's really made by 汪寅仙 is another story, as many of these pieces are actually fakes).

「寅」is fairly recognisable in this carving, so I'll provide a breakdown of the other three characters.

This carved seal is slightly more difficult to read than normal, because of the characters being squashed into a circular shape, causing some components to be slightly distorted.

「汪」is a description of a body of water meaning vast and deep, and is comprised of

This directly leads to the seal script form

Note that the modern component form「氵」is a drastically simplified version, and ancient scripts did not write this component in this manner for a long time.

「㞷」was the original character for「往」, and was a compound of

The total form emphasises the meaning to go (by travelling on foot covering ground distance).

and an ancestral variant of「之」looked like「㞢」; the following is a few samples of the shape to provide an idea of the relation between the shapes:

but it was subject to some shape changes:

A similar change actually happened to「十」, which morphed almost exactly like the top part of「土」. Note that these are not strictly how the character evolved, so don't over-interpret these sequences.

The original forms lead to the combination

and the shape of「㞷」should be seen as coming directly from「㞢」and「土」. This directly leads on to the seal script shape

Note that the top-right part of this component in the original image is cut off to fit inside the circle.

「人」is a side view of a standing person:

This directly leads on to the seal script shape

Note that the left side of this component is distorted to fit inside the circle.

The side peaks eventually simplified into vertical lines, leaving the middle peak in seal script:

「未」originally depicted a tree「木」with extra branches, representing blooming, and by extension the fragrance of blooming trees:

For stylistic reasons, the bottom of「未」(and similarly 木, 本, ...) morphed into something resembling「巾」, leading to the seal script form

「刀」was originally a picture of a knife or blade:

「衣」was originally a picture of clothing: 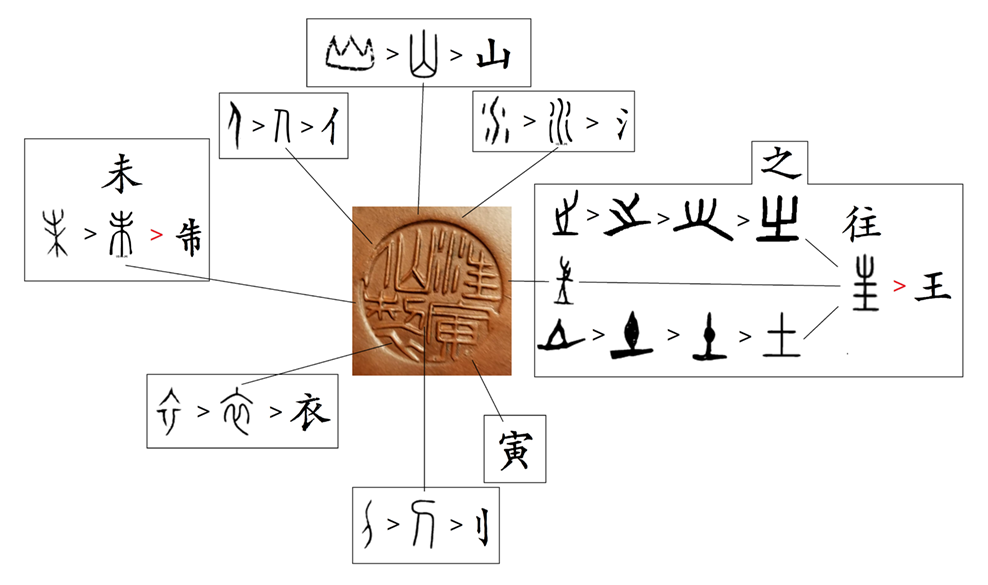 No idea on the first picture as it seems to be ancient writing.

However, for the 2nd and 3rd picture, it is a famous poem from this guy - https://en.wikipedia.org/wiki/Li_Bai

which means made by 汪寅仙

The inscriptions are actually a poem written by Li Bai (李白). It was originally written in the Tang Dynasty (唐朝). The poem is called 靜夜思.

The poem goes as follows:

Night Thoughts (Thoughts in the Still of the Night)

The Moon shines brightly before my bed;

It looks like there is a layer of frost on the ground.

I look up to the sky and see the bright moon,

Then look back, thinking of my home village.

The poem is in an AABA rhyme style, which means the last character of the first, second, and fourth line rhyme.

4
What are the characters on this seal? (Characters identified: 李濟懋印)
4
What does this seal of 宋高宗 say?
3
Chinese painting poem and seal meaning