I have a children's wallchart with a variety of weapons and military vehicles. One of the items is 火箭扫雷车. I think I understand the meaning (it's a kind of minesweeper that uses rockets to clear minefields); however, I am stumped on an elegant translation. Also I would like to know if this is a vehicle known to the average Chinese mainlander. It's not a weapon known to most westerners. 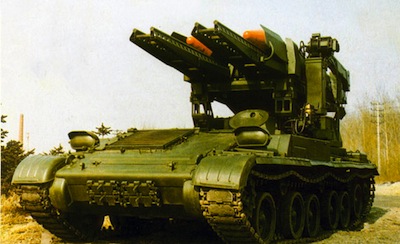 After searching on google I found "Minesweeping Rocket System" to be a somewhat official translation to "火箭扫雷车".

I'm not sure if translation questions should be on-topic or not, but I think a literal "Rocket minesweeper" or "missile minsweeper" would be appropriate. Military vehicles don't usually have elegant names.

I found one example of the term "rocket minesweeper" specifically referring to a Chinese military vehicle.

It isn't something specific to China. You know China rarely comes out with something original. The west has it long before China and is probably more powerful.

The UK have something called Python Rocket. The news called it a "Python Rocket Mine Sweeping Vehicle".

The rocket system is called Mine-clearning Line Charge(MICLIC or MCLC for short). In the US it is probably named as "M58 MCLC", M58 being the tank. The Wikipedia page also says India has a similar system of which the name is along the line of "MCLC vehicle". Russia has something similar called "Meteorit Mineclearing System".

I would probably call it Rocket Mine-clearing Vehicle, but both Frank and Mr's translations are fine.

Not the answer you're looking for? Browse other questions tagged word or ask your own question.