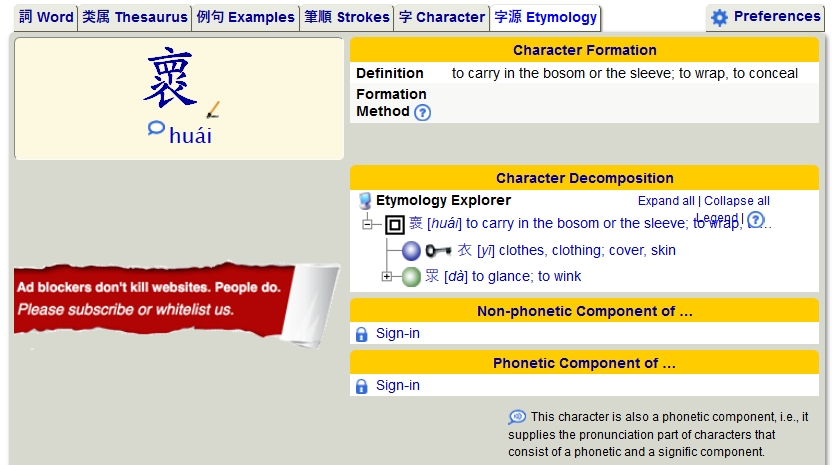 Interestingly, there is another character 褢 [same reading as 褱], with 鬼 inside.

Here are a few parts where Humanum mentions the relationship between 褱/褢/鬼 and even 歸:

Here's evidence that 褱 [gruj] and 鬼 [kjujʔ] were homophones. Actually, 歸 and 鬼 might be cognates (人所歸爲鬼), but I digress. The point is, [kjuj] is the much more likely target reading to hit for 褱, not the [k-l- | -p] initial/final pattern of 眔.

褢 was used in the Han-Tang era to mean "hold in," without the emotional semantics.

This is the same as the "give" meaning.

So, to answer the question: "Why doesn't 褱 sound like its phonetic etymon 眔?" It's because it has no sound component, and 眔 is not its phonetic part. On the other hand, the later character 褢 would be good candidate if you're looking for a legitimate phonetic part for a cognate of 褱.

The more common term would be phonetic component or sound component.

Bolded parts are my own suggestion of the phonetic correspondence.

Note,「眔」is very commonly interpreted by scholars as a picture of tears「氺」(water) flowing down an eye「目」.「褱」, by most standard dictionaries, is thought to be the original character of「懷」, with the following meanings:

Supposedly, there is a semantic connection between「眔」and「褱」in the second definition.「眔」is also thought to be the original representation of the word now written as「涕」.

16
Are 乒 and 乓 used in classical chinese?
11
Why does 息 mean news?
4
Dictionaries suggest 透 (tou) is pictophonetic where 秀 (xiu) provides the sound. Is this through a classical chinese pronunciation?
4
How does the hook in 甩 negative 用's meaning?
1
What semantic notions underlie 頁 ('page') with '預' ('beforehand')?
0
Did 謠's phonetic component (䍃) semantically shift it away from 言?
1
What semantic notions underlie “to think; to contemplate”, with “but; however; nevertheless” with “only”?
3
Do 形声 words have an approximate or historical phonetic part?