From the book 活着 (on my Kindle): 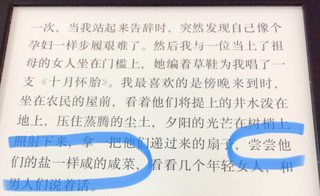 I'm interested in the part in bold, which I translate to:

Having 盐 in there makes no sense to me; it seems redundant and even ungrammatical (but presumably I'm incorrect). Moreover, writing 咸的咸菜 seems tautological. It seems to me that 尝尝他们的咸菜 would convey the same meaning.

The part is actually fine. This is a parsing problem; the whole meaning is

trying their pickled vegetables which taste as salty as (pure) salt

Note that salty is actually a measure of the richness of flavour of 鹹菜, so while translating the above into English (as salty as salt) sounds a bit unpleasant, it's meant to be a praise of the tastiness of the villagers' dishes.

The sentence is understandable, but doesn't sound very natural.

In Chinese, it's unnatural to use two attributive-的 phrases to modify the same noun. In this case, 他们的 and 盐一样咸的 are the attributive 的 phrases, which modify the noun 咸菜. It's natural to say: 尝尝他们的咸菜 or 尝尝盐一样咸的咸菜, but simply combining the two phrases together(尝尝他们的盐一样咸的咸菜) looks clumsy(I am not sure if I should say it wrong, but at least it appears to be the bad writing.).

Now, the question becomes how we can resolve this when we have to use two attributive-的 phrases to modify the same noun? We can engage 指示代词 （demonstrative pronoun）那，那个，那种，... and etc. Your original sentence can be paraphrased as: 尝尝他们那种像盐一样咸的咸菜. It's a common sense that 盐 is the most salty substance, so 咸 here can be implied： 尝尝他们那种像盐一样的咸菜.

Sometimes, 那种 and 那件 can be omitted, so 尝尝他们盐一样的咸菜 and 展示我美丽的衣服 are acceptable. I suggest you stay with the full version when you are unsure if it's droppable from your sentence.

Hope this can help you.

First, you need to parse the sentence like this:

Then there's a missing pronoun in the third part. The author omits the pronoun to emphasize the first character 盐. The complete expression should be:

So the meaning of the above slice of the sentence is clear. 跟+noun.+一样+adj means "the same + adj. + as + noun.". The last 的 means this short phrase is the attribute of 咸菜.

As @dan has said, people generally don't use two attributes consecutively. However, when they use, they have a purpose. From the paragraph, I can understand the author is trying to describe the daily life of some countryside people. Here the author uses two attributes for emphasis. This pickle must've left a great impression on the author. In addition, though pickle as salty as salt should taste bad, but the author still enjoys this, which means countryside life is hard, but the author treasures it.

【盐一样咸】is a literature analogy that using some sort of local dialect composition, as you already catch its meaning.

It is grammatically correct, though it is not to the liking of some "grammar teacher".

Unlike Latin, Mandarin is a living language. The language is evolve and also absorbing various regional language diverse habitual usage, after all, the landscape(9.6 million sq km) is as big as the whole Europe continent (10.18 mllions sq km). Such "awkward" composition is quite normal in mandarin.

Though English speaker are not familiar with such analogy, "salt salty pickles" is pretty close. I am not surprise if some other language use similar analogy.

Not the answer you're looking for? Browse other questions tagged meaning-in-context phrase-meaning or ask your own question.

2
Why did 人艰不拆 get banned?
1
What does '根筋' in '一根筋' and '少根筋' mean?
3
Meaning of 的 and 之 when both are used in the same sentence
2
Dialect in Chongqing and Huaihua
1
Matrix movie quote question: Advice on saying/translating "There is a difference in knowing the path and walking the path"?
4
Why is 我的朋友今年住在美国 translated to both "my friend [is living in / lived in] America this year"?
2
Why is 长 never translated with 'look like'?
2
What do 開眉粥 and 愁眉飯 mean?
1
Why does the grandma jump up and shout "杀了俺俺也不信！"?