Why is it SOV (and not SVO) in 我可以跟她约会?

Chinese is supposed to be (Subject-Verb-Object) SVO right? (as I learnt, of course) then why in this sentence

does 约会 mean "to date"? It's a verb I presume, why is it (Subject-Object-Verb) SOV here?

I have a hunch though that it's not even a verb, if so, It would be mean "I can go with her on a date?"

If so, shouldn't there be a classifier? “一个约会”

Chinese is supposed to be SVO

Correct. More specifically, Chinese can be SVO or SV, plus additional components. Sometimes we omit the subject if it's obvious what the subject refers to.

"约会" means to date, so It's a verb I presume

When using as a verb, the simplest way is "我/约会" SV, but it doesn't make sense at all because you can't go on a date alone. So the common usage is

The only difference with the english version is Chinese tend to put 和她 (adverbial modifier, which only gives more details and is omittable in a sentence) before the verb. So it's still an SV structure.

约会 can be a verb in Chinese.

Welcome to the confusion one always encounters when trying to apply Indo-European linguistic categories to a non-IE languages.

I'd say that 可（以）is a "verb" (the description an action) here and 跟她约会 is an "object" (what is acted upon).

If you insist on assigning fixed "verb"/"object" etc labels (in IE sense) to Chinese "words" (character combos, really) and using these "words" only in those artificially fixed syntactic positions, you will encounter similar strangeness all the time. At least beyond the beginner level.

Chinese "words" are fluid with syntactic positions they can be used in, as verbs, objects and what not. In modern Chinese (白话）these "parts of speech" have become more rigid than in 文言文，but still far away from the rigidity on IE languages where they are fixed by morphology (as they are even in English).

Or perhaps your confusion is caused by misunderstanding of the whole SVO / typology thing. It is about overall sentence structure, not about phrase (shorter part) structure.

可以跟他约会 is a completely regular verb phrase, and "verb phrases" are VO in Chinese. Yet 跟他约会 is another smaller "verb phrase" according to this parser (https://nlp.stanford.edu/software/lex-parser.shtml). Its rules fail here for all the reasons described in other responses - it's rather a "noun" phrase here.

Finally, for a bit of giggles on Chinese "words" and syntactic parsing, check this wonderful list. I lifted it from some book long ago, forgot which. I asked a few natives and they said only 3-4 sentences in this list read a bit stiff, but all are correct. 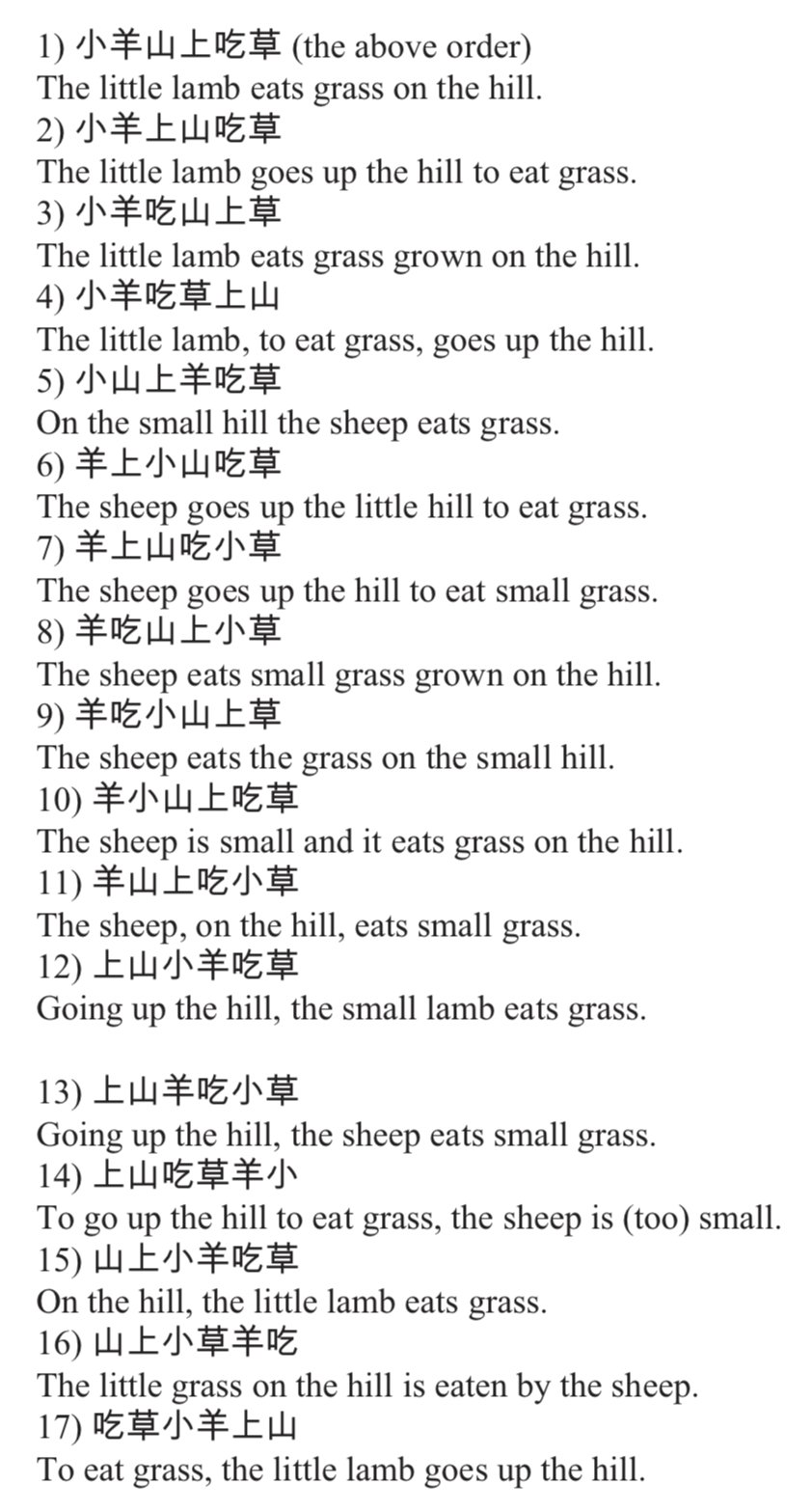 Old Chinese was SOV, but we're talking about Modern Chinese, which is SVO. Here 约会 means "to go on a date," and the whole sentence is "I can with her go on a date." The main verb is actually "can," and "with her go on a date" is the noun phrase acting as the object. "With her" is a prepositional phrase and in Chinese it precedes a verb phrase.

Not the answer you're looking for? Browse other questions tagged grammar word-order or ask your own question.

2
Best way to express a change of subjects in a succession of events
4
Grammar behind “你的脑子进水了”。
4
What is the use of 的是?
1
I have problems analyzing the constituents of the following sentence: 德国人不习惯他们旁边围满了人
5
Why is 于 needed after 不屑 (but sometimes not)?
0
Why is there no conjunction between 健康 and 有活力的生活状态 in 无法保持健康有活力的生活状态?
0
What is 了 doing in the sentence 我出发了?
2
Structures for describing people, appearance or personality
1
Position of direct object in a sentence with an adverb of degree
2
HSK6 Standard Course: Does the sentence 她的脾气不好，经常不知道为什么突然就生气了 violate the textbook's own grammar rule regarding inconsistent subjects?