Why I ask: this poster has appeared in some campus bathrooms (in the women's ones, at least): 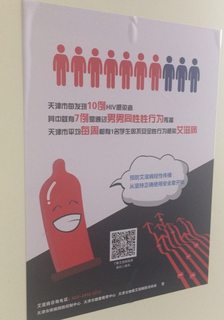 Zooming in, the first part is:

In Tianjin, in every 10 cases of discovered HIV infection
among these are 7 cases spread through male-male same-sex sexual activity
The Tianjin average, every week has 1 student, because of [爪 (?)] unsafe sex, is infected with aids

I don't think 爪 (=claw) is correct, but I couldn't find the correct character. (My phone suggests 𥘅, but it doesn't appear in dictionaries.)

And I transcribe and translate what the condom says:

To prevent aids [经 (?)] and sexually transmitted diseases
start with insisting on proper use of condoms

I'm not sure what 经 (YouDao, dict.cn) is doing here. I don't see a relevant definition. Is it yet another word for "and"? Or maybe it means "and other", or "along with".

Not the answer you're looking for? Browse other questions tagged translation transcription or ask your own question.

5
What kind of food is 漢巴德? (from 官場現形記)
0
Translating "should" to express what is probable or expected
2
Starting a sentence with "actually..."
2
What is 吐槽? How should I translate it?
1
My dictionary shows 说 is both shuì and shuō
8
How do I self-answer "What does this say?"
1
What was this exchange 花粥 had with the crowd?
0
What are the correct characters for 直接用自己的bǎolǐng象却换掉了对方的这个c3马 describing Caruana's recent surprise chess move?