What's the joke about Guanhua in Ticklish Tales Contiuned by Xiaoshi Daoren?

Chinese History: A New Manual, Fifth Edition by Endymion Wilkinson has a little note that says:

§30.7 is a section entitled Guides & Research Tools, where the only thing that seems to match the title is this entry:

Which seems to be this book:

Google Books doesn't seem to have a scanned version and I can't find any other digital version online at the moment.

There seems to be a chapter of Jokes that being on page 658 and run to page 670.

Does anyone know the joke that is listed on page 667 of the book?

It seems that the The Shorter Columbia Anthology of Traditional Chinese Literature Edited by Victor H. Mair also contains the same joke. 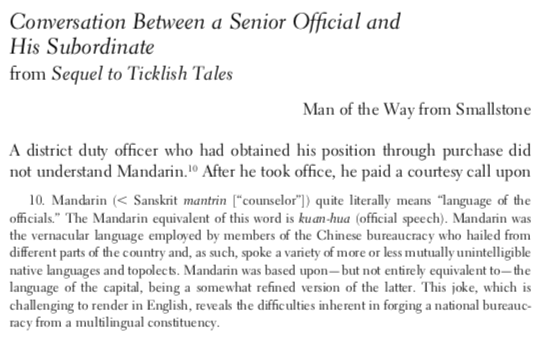 and continue on page 438 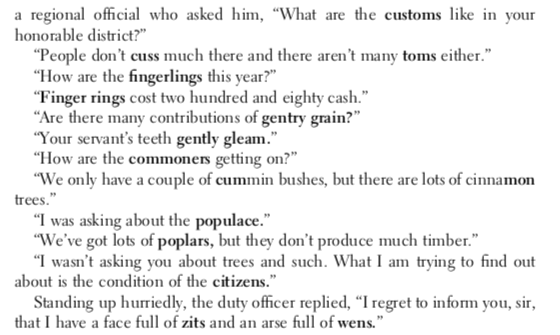 The original Chinese would need to be dug up to make any sense of this translation though.

A District duty officer who had obtained his position through purchase did not understand Mandarin.10 After he took office, he paid a courtesy call upon a regional official who asked him, "What are the customs like in your honorable district?"
"People don't cuss much there are there aren't many toms either."
"How are the fingerlings this year?"
"Finger rings cost two hundred and eighty cash."
"Are there many contributions of gentry grain?"
"Your servants teeth gently gleam."
"How are the commoners getting on" "We only have a couple of cummin bushes, but there are lots of cinnamon trees." "I was asking about the populace."
"We've got lots of poplars, but they don't produce much timber."
"I wasn't asking you about threes and such. What I am trying to find out about is the condition of the citizens."
Standing up hurriedly, the duty officer replied, "I regret to inform you, sir, that I have a face full of zits and an arse full of wens."

10. Mandarin (< Sanskrit mantrin [“counselor”]) quite literally means “language of the officials.” The Mandarin equivalent of this word is kuan-hua (official speech). Mandarin was the vernacular language employed by members of the Chinese bureaucracy who hailed from different parts of the country and, as such, spoke a variety of more or less mutually unintelligible native languages and topolects. Mandarin was based upon—but not entirely equivalent to—the language of the capital, being a somewhat refined version of the latter. This joke, which is challenging to render in English, reveals the difficulties inherent in forging a national bureaucracy from a multilingual constituency.

Not the answer you're looking for? Browse other questions tagged resources or ask your own question.

3
Information about the Nantong dialect
3
Reliable source for Chinese translation of Pali Canon Jataka tales (佛传故事/佛傳故事)?
3
What is Alex and John Dent-Young's translation of this passage of the Water Margin?
6
Where to find questions from the imperial exam?
3
Are there satirical news sites in Chinese, like The Onion?
16
What's a good place to look up the etymology of certain Chinese words that aren't immediately obvious?
0
Where can we find the most frequent combination of two Chinese words (搭配)?