Apparently this character has been dubbed the character of the year (2018): 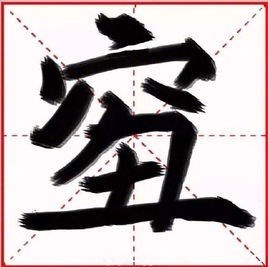 It's pronunciation is said to be:

but a lot of people claim it should just be pronounced the same as:

I can't find this character in the dictionary. What is it? Where did it come from?

The character is made up for a dialectical word qiǔ.

The reading「我」(I, me) is a further joke:

(Self-deprecatingly) What is dirt poor or both poor and ugly? ME!

The word qiǔ may be written using a real character「糗」(congealed, used to describe cooked grain food like rice porridge or wheat noodles that's been left out for too long). It is said that the modern uses of qiǔ is derived from the original meaning via semantic extension:

See the baidu reference. However, this may be folk etymology.

A new Chinese character, invented by netizens, has become massively popular on social media this week - especially among self-mocking millennials. According to Shanghaiist, the character 'qiou' is a combination of three characters - 'qiong', meaning poor, 'chou', meaning ugly, and 'tu', meaning earth. Taken together, the character essentially means "poor as dirt and ugly."

Since 穷 is a simplified character, the origin of this made-up character should be Mainland China.

You can't find it in dictionary because it is not a real character.

9
Searching for characters by parts
4
What and where is the connection between 压岁钱 and the character 岁 that appears in it?
15
What is the glyph origin of '奇'?
2
English translation for 来 in 你哪儿来的这么多书? compatible with a Chinese-to-English dictionary
12
Confusion about the ice radical 冫
7
Character 瞓: where did the pronunciations come from?
6
Is there any evidence that 90% of characters are phono-semantic compounds?
1
Interesting "bullet points"
3
I have been learning traditional characters but my professors don't accept it. What do I do?
2
Compound words with 生