Meaning of "~~" at the end of a sentence

I see quite often a few "~" characters placed at the end of sentences, especially in e-mails, texts, and social networks.

Is this an informal exclamation or an emphasis mark?

No, it's neither an exclamation nor an emphasis. It's used for

The standard usage of this punctuation is a connective, called 浪纹(wave symbol). See the standard 《中华人民共和国国家标准标点符号用法》.

EDIT1: definition of "formal" and the very informal usage

Thanks for @fefe's comment. To make it more clear, let me clarify the definition of formal in this answer here.

The word formal in this answer means grammatically formal in punctuation, but NOT suggesting wording or phrasing formal.

In the non-standard usage,

On the Internet, people aren't so aware of the grammar. Or, we can even say, the netizens are creating new grammar, though there's a debate resulting in the rule that you should not use the Internet grammar in your Chinese examinations. In fact, there is a much more informal usage of ~, which is so informal that I consider even not to list it in the non-standard usage list. It is widely used in emoticons in China and Japan. For example

EDIT2: brief history of the establishment of punctuation standard

History of the official standard of modern punctuation in mainland China.

1920 The ministry of Education of the Northern Warlords government promulgated Order for Adopting Modern Punctuation (《通令采用新式标点符号文》). It is the first standard for modern punctuation published in the form of law.

1951 The General Administration of Press of the PRC government promulgated Usage of Punctuation (《标点符号用法》).

1990 As the punctuation had changed a lot in the past forty years, Press and Publication Administration promulgated the revised version of Usage of Punctuation.

1995 State Bureau of Technical Supervision promulgated the National Standard for the Usage of Punctuation (《中华人民共和国国家标准标点符号用法》 GB/T 15834-1995). On June 1st, 1996, this standard was executed. It is the standard we are using today.

Punctuation and language are changing gradually all the time. I personally believe there will be some day that some of the informal usage of ~ will become formal standard ~~

EDIT3: "Which tilde should I use?"

The wiki page of "tilde" points out there are many kinds of tildes. Because your browser may not correctly render all the characters on that page. I illustrate the table as a picture here (open it in a new page to see full size): 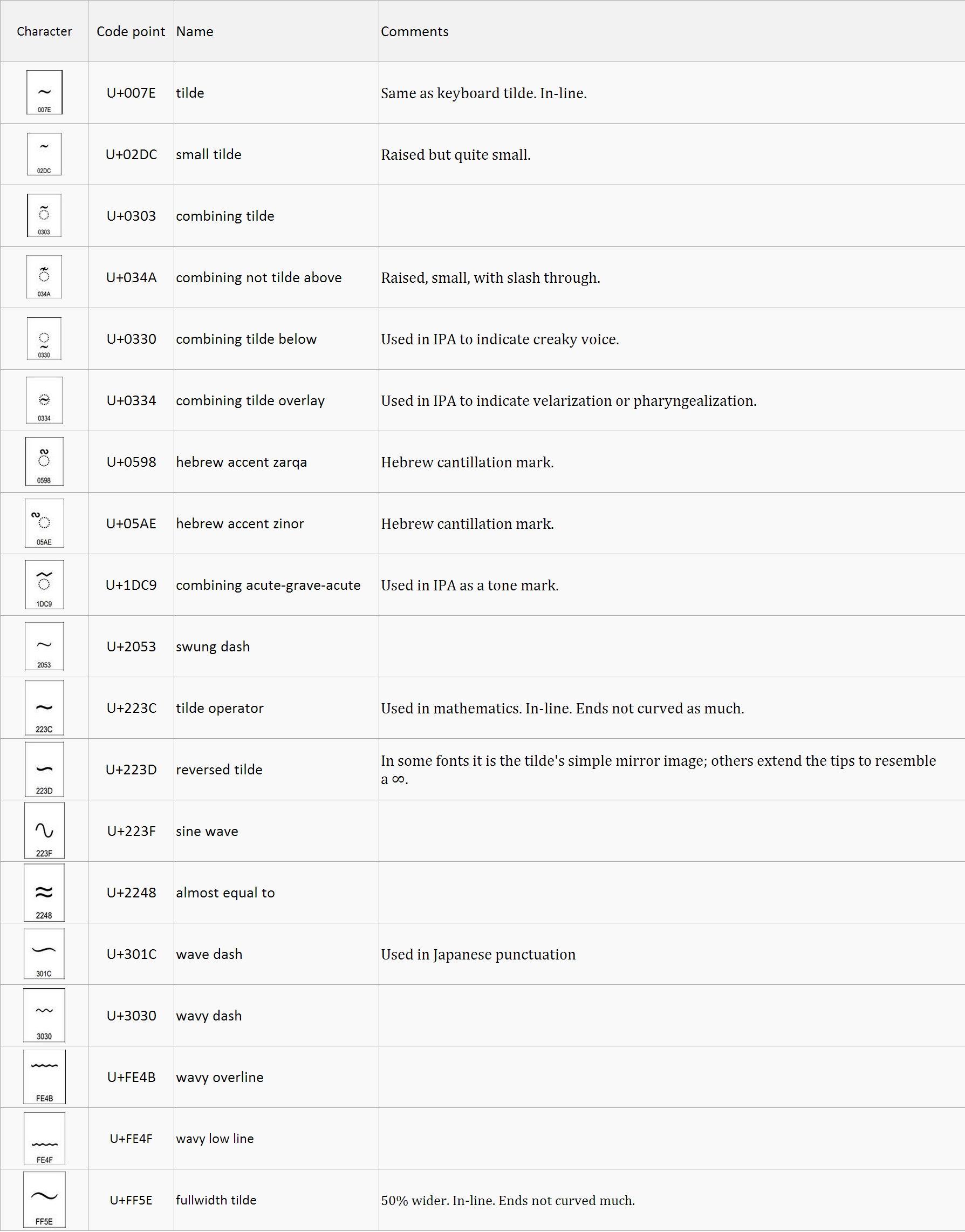 So, according to the standard (providing the size and the position of the 浪纹), in formal text, you should use unicode U+FF5E, i.e., ～. In informal usage, a simple tilde on the keyboard U+007E, i.e. ~, is just OK.

Not the answer you're looking for? Browse other questions tagged punctuation emphasis or ask your own question.

14
Is the usage of European punctuation acceptable in Chinese writing?
17
Why use 的 at the end of a sentence such as 我一定會去看他的?
13
Where should I place the comma in large numbers?
13
What's the difference between ，and 、
8
What are the rules for using commas and periods in Chinese?
3
Is the halfwidth ideographic comma (､) (U+FF64) ever used in Chinese punctuation?
5
What are the characters for punctuation in older literature?
4
What did the original Tao Te Ching use for punctuation?
0
How to type the Chinese ellipsis ⋯⋯ using Google Pinyin IME?